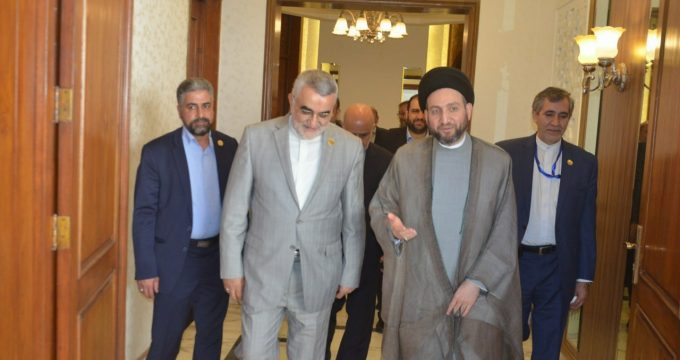 IRNA – Head of the National Wisdom Movement of Iraq Seyyed Ammar Hakim said on Saturday that Iraq has adopted policy of open doors with the regional and international countries.

He made the remarks in a meeting with the visiting envoy of Iran’s Majlis Speaker to the conference of parliaments of Iraq’s neighboring countries Alaeddin Boroujerdi.

He added that his country has taken long steps to advance the policy with the regional and international states.

“Iraq is trying to establish balanced ties with all on the basis of mutual interests,” he said.

During the meeting, both officials discussed latest political developments in Iran and the region as well as avenues for promoting bilateral relations.

For his part, Broujerdi appreciated Iraq for its stance regarding Iran and highlighted significance of holding the parliamentary meeting of Iraqi neighboring states in boosting parliamentary collaboration among the countries.

During the meeting, both officials also discussed latest political developments in Iran and the region as well as avenues for promoting bilateral relations.

Iraq neighbors’ inter-parliamentary meeting opened on Saturday with the participation of the speakers of parliaments of Kuwait, Saudi Arabia, Jordan, Syria and Turkey.