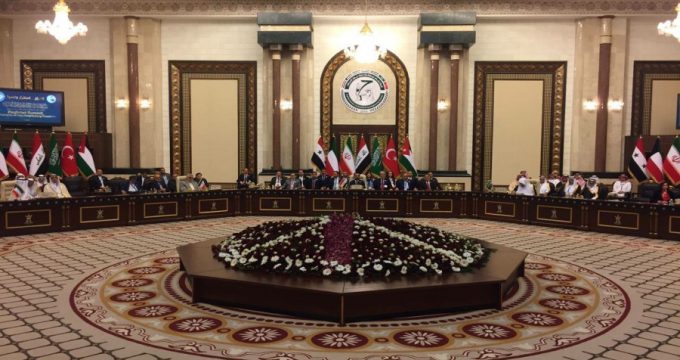 IRNA – Iraq’s parliamentary summit kicked off in Baghdad on Saturday bringing together regional powers, including Iran, in a show of unity.

The one-day summit, titled ‘Iraq, Stability and Development’ is presided by Iraq’s youngest-ever speaker of parliament Mohammed al-Halbusi, 38, who said Friday Iraq was ‘honoured by the presence of its neighbours in Baghdad’.

‘Today’s summit is a clear sign of this reality that Iraqi is reclaiming its position in the internaitonl arena and has been successful in ending terrorism on its soil,’ al-Halbusi told the gathering.

He described the event as ‘an historic day for Iraq’, saying it’s hosting the guests and neighbours after it ‘victoriously fought the terrorism through the proxy of its neighbours and thanks to the support of religious authorities as well as the presence of all walks of the Iraqi life’.

The Iraqi parliament speaker expressed his gratitude for ‘all friends, partners and neighbours that stood by Iraq in hard time’.

Syria, Saudi Arabia, Kuwait, Turkey, Jordan are other participants of the summit. Iran is being represented by lawmaker Alauddin Boroujerdi.