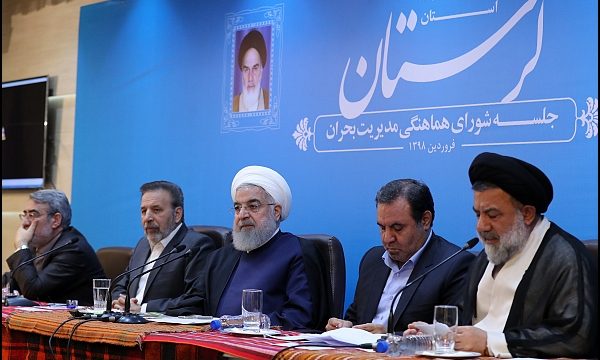 Gov. to pay for temporary housing of flood-hit families: Rouhani

MNA – Iranian President Hassan Rouhani said the government will pay for temporary housing of the people in flood-affected areas of the country.

He made the remarks Saturday at the coordination meeting of Disaster Management Taskforce of Lorestan Province.

Rouhani hoped that the reconstruction of housing units would be completed in the shortest time possible, reported the official website of the Iranian Presidency.

Stating that housing reconstruction plans must be developed based on the reoccurrence of floods, he added, “The Red Crescent, EMS, executive officials, IRGC, Army, Basij, and Police did a great job in dealing with the recent floods in the country.”

“The fact that we don’t have infectious diseases in areas that are hit by the floods is remarkable for the World Health Organization,” Rouhani noted.

He also underscored the importance of teaching people on how to react to natural disasters, noting, “Relief and rescue teams may not reach affected areas in the first 30 minutes after any incident, and this half-an-hour is a golden time for saving lives and assets of people; so giving people related training is crucial.”

The recent floods, which hit many provinces in Iran since March 19, have killed over 70 people so far and caused damages to 438 urban houses and 87,000 village houses. Meanwhile, intensive efforts are underway to control damage from flash floods, and alleviate the situation in the flood-stricken areas.