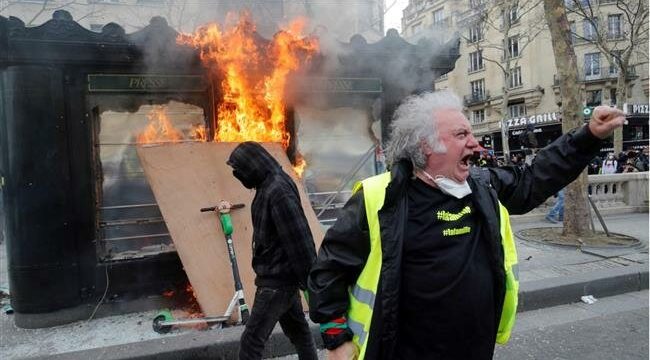 Press TV –  French police are on high alert for a flare-up in “yellow vest” protests Saturday after pledges of prodigal donations to restore Paris’ Notre Dame Cathedral generated a wave of resentment.

Interior Minister Christophe Castaner says more than 60,000 police officers and gendarmes are deployed to confront protesters taking to the streets for the 23rd straight Saturday.

Domestic intelligence services have informed him of a potential return of “rioters” intent on wreaking havoc in Paris and several other cities in a repeat of violent protests staged last month, he said.

“Violent extremists once again plan to gather in certain towns such as Toulouse, Montpellier, Bordeaux and above all Paris,” Castaner said at news conference in Paris Friday.

“Their objective is clear: to do another March 16,” when there was widespread destruction on the Champs Elysees avenue in the capital, he added.

“The rioters will be back tomorrow,” Castaner said, referring to the day when hooded gangs ransacked stores on Paris’s famed Champs-Elysees avenue and set fire to a bank.

The minister said protests near the Champs-Elysees and the medieval church of Notre Dame would be banned on Saturday.

The catastrophic fire at Notre Dame on Monday prompted rich families and corporations to pledge around $1.13 billion for its reconstruction, with President Emmanuel Macon promising to rebuild it in five years.

Those pledges angered many protesters, who have expressed disgust at the fact that their five-month-old movement has not received the same generous donations by France’s elite.

“It took him less than 24 hours to speak about the fire, while he made us wait for three weeks before addressing our issues,” said Ingrid Levavasseur, one of the leaders of the protest movement, referring to Macron.

“You’re there, looking at all these millions accumulating, after spending five months in the streets fighting social and fiscal injustice. It’s breaking my heart.”

Levavasseur also denounced the “inertia of big groups when it comes to poverty and then show off their ability to assemble crazy sums of money in one night for Notre Dame.”

“What happened at Notre Dame is obviously a deplorable tragedy. But nobody died. I’ve heard someone speaking of national mourning. Are they out of their minds?” she said.

The “yellow vest” movement has so far posed the biggest challenge to Macron’s authority two years into his presidency.

The rallies, named after the high-visibility safety jackets worn by demonstrators, started in mid-November to protest against Macron’s planned fuel price hikes, but they snowballed into a national movement, rejecting Macron’s policies and his leadership.

The embattled president was due to unveil policies to quell the grassroots movement just hours before the blaze at Notre Dame forced him to cancel the speech. Macron has yet to set a new date for the announcement.