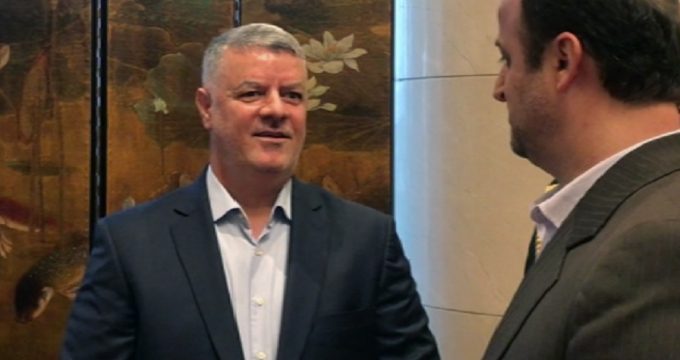 IRNA – Navy Commander of the Iranian Army who has traveled to China said there are very good capabilities for military cooperation between the two countries’ navies.

Rear Admiral Hossein Khanzadi has been invited by the Chinese Navy commander to attend the Navy commanders Summit of the various countries of the world and also to participate in the 70 anniversary of the establishment of the Chinese naval force.

He expressed hope to make use of the capacity of this summit in talks with the Chinese Navy as well as the commander of the navy forces of the friendly countries on this trip.

The Navy Commander of the Islamic Republic of Iran’s Army went on to say that the region, especially the west of Atlantic and the north of Indian Ocean, did not need the foreign presence of nations and naval forces to ensure security, and countries of the region themselves can directly secure various regions.

Khanzadi stressed that he will meet with some Chinese military officials, including the naval commander of the country.

About equipping the navy of the Islamic Republic of Iran with modern weapons such as destroyers, the senior military official said in another part of his remark, ‘What is in the long-term of Navy ‘s objectives is to carry out the duties assigned to the navy in relations with the country, region and the world. ‘We need the development of a naval fleet to maintain security in maritime areas under our sovereignty of the sea, the surrounding seas and participation in the establishment of security in the high seas,’ he said.

Khanzadi went on to say, ‘Destroyers are a significant part of this capacity, and certainly in the naval fleet development plan, we will see two more Moj (Wave) class destroyers will be added to the Navy’s north and south fleets as well. And rocket launchers are on the agenda.’

‘All the capacities are created for this, in order to achieve a good collective security in cooperation with the countries of the region, as we always emphasize,’ he said.

The navy commander concluded the countries of the region have the ability to secure security in the region without the presence of foreign and Western forces, especially the various coalition that has been formed.