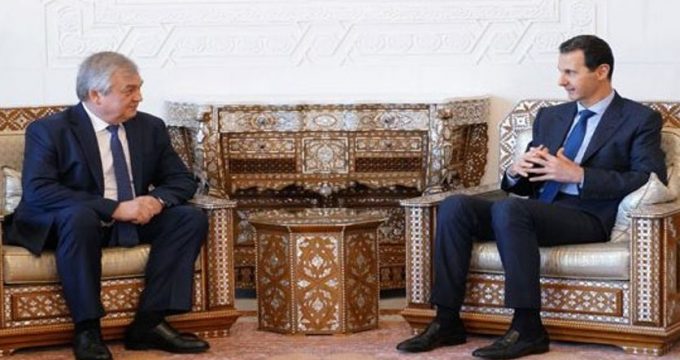 IRNA – Syrian President Bashar al-Assad and Russian President’s Special Envoy to Syria Alexander Lavrentiev on Friday dealt with the agenda of the upcoming round of Astana talks.

They stressed the importance of continuous coordination between the two sides regarding the raised issues to come out with positive results that achieve aspirations of the Syrian people, on top of which is the elimination of terrorism and the restoration of security and stability to all Syrian territory, SANA reported.

Assad affirmed the necessity of work during this round to overcome obstacles that impede the implementation of what had been previously agreed upon about Idleb region, which focuses on eliminating terrorist groups that are positioned there and attacking civilians in neighboring safe areas.

For his part, Lavrentiev expressed his confidence that Astana talks will achieve more successes, whether with regard to defeating terrorism, the political process, the constitutional committee, or knowing fate of the missing and displaced people in a way that contributes to ending the war in Syria, returning the Syrians to their areas and reconstructing what had been destroyed by terrorists.

Initiatives related to the exchange of detainees, fate of the missing and the efforts made in this framework were discussed, where there was an agreement on need to accelerate the work to attain the desired results in this file due to its important humanitarian and social dimensions.