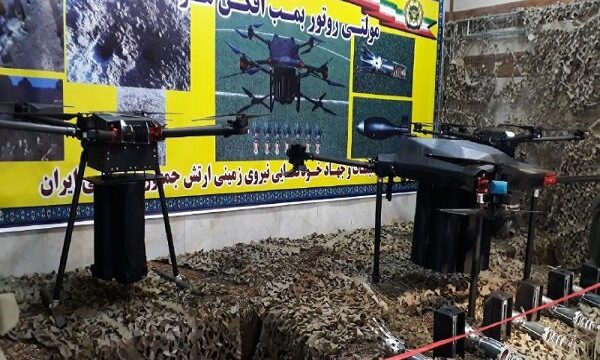 MNA – Six home-grown achievements, including a smart multirotor bomber and an anti-drone net launcher, were unveiled by the Army Ground Forces on Saturday.

The achievements were unveiled in the presence of Iranian Army Ground Forces Deputy Commander Amir Nozar Nemati on Saturday.

The achievements include a smart multirotor bomber (with a 5km range, 8 launchers, and up to 30 minutes flights continuity); an anti-drone net launcher (with a 20m range); an atomic plasma spectrometer (can be mounted on UAVs, quadcopters, vehicles and military equipment for sampling); and a smart ground pod (with the ability to discover a human target as far as 15m and a vehicle in 50m distance; it is also equipped with a friend or foe (IFF) identification system).