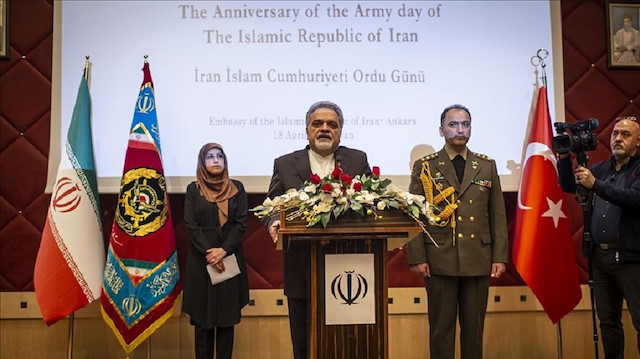 The Iran Ambassador to Ankara Mohammad Farazmand said the U.S. decision was a “unilateral decision [that] was rejected by many members of the United Nations, including Turkey.”

“IRGC, which is a main part of Iranian official army, had a very successful experience against terrorist groups in recent years in Syria, Iraq and elsewhere in the region,” he said. “Your participation here and international army day of Iran is a clear message and a clear response to unilateralism.”

“We have to be able to develop bilateral military, defense and security cooperation based on mutual benefits.” he added.

Among the attendees of the reception were high ranking military officials from Turkey, Felicity Party leader Temel Karamollaoglu and Vatan Party chairman Dogu Perincek as well as other officials from the two countries.

Iran’s powerful IRGC was initially established to serve as the vanguard of Iran’s 1979 revolution. It currently enjoys more autonomy than the rest of the Iranian military, answering only to Iran’s supreme leader.