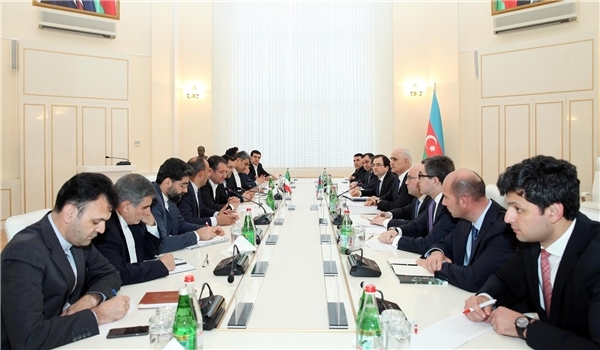 FNA – Officials from Iran and Azerbaijan opened a factory in the Hajigabul Industrial Park, 113 km from Baku, where the two countries will jointly manufacture busses and trucks, in a move to further increase economic and industrial cooperation.

The bus and truck production plant will be built by Azermash Senaye LLC founded by Azermash (25 percent) and Kartal Az (75 percent).

Earlier on Thursday, Rahmani and Azerbaijani President Ilham Aliyev, in a meeting in Baku, pledged to increase the trade volume between the two countries, adding that the two sides will spare no efforts to boost joint industrial projects.

During the Thursday meeting, Aliyev said that bilateral relations between the Republic of Azerbaijan and the Islamic Republic of Iran are developing successfully in political, economic, transport, cultural and all other areas, including in the fields of industry and trade.

It was noted that under the joint projects of the two countries, an automobile plant in Neftchala Industrial Estate has been successfully operating, a pharmaceutical plant will be built in Baku, and a foundation stone will be laid for a bus plant in Hajigabul Industrial Estate as part of Rahmani`s visit to Azerbaijan.

The sides stressed the importance of boosting the trade turnover between the two countries, implementing successful projects in the industrial sphere as well as good prospects, and providing additional opportunities for expanding cooperation on this front.

The bilateral economic and energy projects between Azerbaijan and Iran, the North-South International Transport Corridor, the Rasht-Astara railway project, the issues of cooperation in the field of holding exhibitions, signing of memorandums of cooperation were also discussed during the Iranian minister’s visit.

Earlier in mid-March, Tehran and Baku agreed to expand bilateral ties and mutual cooperation in different fields of agriculture.

Iranian Economy Minister Farhad Dejpasand and his Azerbaijani counterpart Inam Karimov discussed mutual cooperation in different fields of agriculture, including extra-territorial cultivation, livestock quarantine and food security, during a meeting late on March 14 in Baku, on the sidelines of the 13th Summit of Iran-Azerbaijan Joint Economic Cooperation.

They also emphasized that the two countries should use each other’s experience, operationalize agreements signed earlier and cooperate in the field of Greenhouse Culture.

Meanwhile, Dejpasand met with the Governor of Azerbaijan Central Bank Elman Rustamov and Head of Azerbaijan Railway Company Javid Qorbanov on Thursday and explored relevant issues with them.

Upon his arrival in Baku’s Heydar Aliyev International Airport, a day earlier, Dejpasand had said that Tehran-Baku cooperation will go beyond infrastructure projects, adding that the two countries are determined to broaden ties in almost all areas.

Dejpasand hailed the “very successful relations and historical ties” between Iran and Azerbaijan, saying that Tehran eyes to boost cooperation with Baku in a wide range of economic fields.

The Iranian minister said that the two countries have a very good experience in the implementation of certain joint projects.

Dejpasand is attending the 13th meeting of the Azerbaijan-Iran State Commission for Economic, Commercial and Humanitarian Cooperation in Baku. The two-day meeting kicked off today.

“Meetings will be held with the Azerbaijani prime minister, the ministers of economy and agriculture, the chairman of the Central Bank and the head of the State Border Service,” he said.

Noting that discussions will be held on bilateral cooperation in the fields of money and finance, tourism, agriculture, railway, water and electricity, Dejpasand expressed hope that the visit will be fruitful.