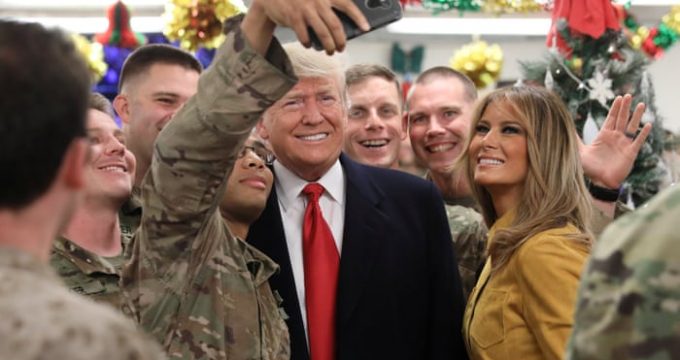 Mounting possibility of waging an encouraged war between Iran and US

Iranian Diplomacy – An Iranian university professor in Tehran has said: “The US decision to designate the Islamic Revolution Guards Corps (IRGC) as a terrorist organization will only prepare the grounds for the start of a military conflict between the two countries and add to the “possibility” of such an incident. Diplomatic moves and calming world public opinion would influence [Donald] Trump’s policies but would not necessarily have the power to change them.”

A few days ago, the Trump administration designated the IRGC as a terrorist organization. Meanwhile, in retaliation, Iran has called US military forces in West Asia as terrorists and this has led to speculations about the possibility of a military encounter between the two countries.

Dr Nasser Hadian, International Relations professor at Tehran University says: “The US enlisting the IRGC as a terrorist group are based on a series of reasons. Some of them are 40-years old, some others are two-years old and the latest are 2 or 3-day-old reasons. The 40-year-old reasons are those related to US’s impression of the Islamic Republic. From the point of view US leaders, the Islamic Republic is only a revolutionary state which has no respect for the regional or global order. Therefore, as a major self-proclaimed creator of world order, the US has disagreements with such a state.”

He added: “The two-year-old reason is the taking office of [President Donald] Trump and a team which believe the solution to the problem of Iran is regime change. They are trying to put this idea into practice by resorting to two strategies of confrontation and agreement. The strategy of agreement is that the regime will change itself while the strategy of confrontation means to use other tools which will finally lead people to make the regime change. Those tools include: Diplomatic isolation, forming coalitions, psychological warfare, triggering ethnic, religious and social class divisions, as well as exerting maximum pressures, sanctions, and finally engaging in war. Designating the IRGC as a terrorist organization was an act in line with the same strategy. In fact, the US has targeted Iran’s most important implementation instrument for its foreign policy in the region or other places which displeases the US.”

As for the short-term reasons of the US decision, the expert on international affairs added: “The US intended to send a message to Israel by doing so and, on the eve of its parliamentary elections, announce that US is a supporter of [Benjamin] Netanyahu. Therefore, as was said by [Foreign Minister] Mohammad Javad Zarif the decision was a gift for Netanyahu.”

Commenting on the possibility of a conflict between the US and Iran in the Persian Gulf region after this US decision, Hadian said: “I will consider the issue from at least the three military, economic, and psychological aspects. Psychologically, the US seeks to place Iranians against the IRGC and depict the latter as the main cause of people’s problems and finally make them fear the IRGC. While economically, since the country’s performance is not transparent, foreign companies prefer not to become involved in trade ties with certain Iranian institutes fearing its possible subsequent problems. The military aspect is not a possibility for now. The US decision will only pave the way and add to the “possibility” for this, but presently the US has no intention of doing so.”

“Therefore, I’m not worried about that [military confrontation] in 2019; instead, I am worried about waging a random, unplanned war. For example, an incident in the Persian Gulf which will not only be important by itself, but it may also increase progressively and become dangerous. Therefore, a random encounter is very much important. But there are some solutions for this, such as making agreements at sea in order to reduce the possibility of such incidents or prevent their intensification.”

The university professor added: “Militarily speaking, there are other types of war. To this end, Israel and Saudi Arabia are encouraging the US to start a conflict because neither Israel nor Saudi Arabia is powerful enough to enter a direct conflict with Iran and they will not succeed in a military action. Only the US has such power. This is an encouraged war which may “possibly” happen this year.”

Haidan added: “However, if there is to be a war in 2020, this will be a pre-planned war of course if Trump fails to find an acceptable position in the next elections. Therefore, Trump will enter a war with Iran to make Americans realize that it’s not a good time to change their president and they have to support him. Therefore, if at that time e.g. summer of 2020, the situation is against Trump, the “possibility” of beginning a conflict will increase but this would not be that easy.”

Asked if designating the IRGC as a terrorist organization can give weight to the occurrence of random wars, he said: “Considering the US decision, an encounter between Iran and the US cannot be interpreted as random; instead. it would be a pre-planned war. A random war is completely unexpected and unpredictable; it is an unwanted war by either side and they have no plan for it.”

As for the necessity of US Congress confirmation to enforce the decision made by the Trump administration, Hadian said: “Enforcing the decision is within the power of the US executive body. Presently, there is disagreement in the US on whether this action is in the context of the 2001 Act or not. Because, in 2001, Congress ratified a law empowering the president to fight terrorism without permission from Congress while, based on the US Constitution, declaring a f war is within the powers of Congress.”

“Based on the 2001 law, the Trump administration does not require congressional permission to confront the IRGC as a terrorist organization. But I believe that when [US Secretary of State Mike] Pompeo did not clarify this issue while responding to a question by CNN, it was part of a psychological warfare. Pompeo wanted to force Iranian leaders to speculate; he wanted to increase global sensitivity. I believe that when the US executive branch decides to start a war, it will find a way and try to find legal justifications despite the fact that these may be criticized in the future. Therefore, even if we assume that the US Congress will pass a law tomorrow banning the US president from doing so, if the government is determined to go ahead, the war will happen. So, it is best for Iran not to involve itself in US legal litigations and whether Congress will confirm this decision or not.”

As for the legal basis of designating a country’s military force a terrorist group according to international law, Hadian said: “I look at these issues from the window of international relations and the angle of power. Even if the entire world was against the US move, it would still go ahead. Therefore, Iran should not engage itself in legal issues and must focus on what is important. What is likely to change the Trump administration approach is other considerations, such as power, soft and hard deterrence, and economic benefits.”

Hadian added: “I don’t want to say that legal issues are not important and should not be taken into consideration, but I believe they take backstage. What is more important to me is organizing anti-war forces worldwide through articles, demonstrations, and strikes. These are things that can influence Trump’s policy. Of course, it does not mean that they have the power to make any changes. Thist is why legal issues are not my first priority.”

The university professor added: “Reactions to the US decision by countries such as Britain can be effective both as diplomatic efforts or other related moves. In fact, diplomatic efforts, preventive military activities, and soft preventive activities (global and regional public opinion) can be effective and will influence strategic calculations. Iran should be more active to this end.”