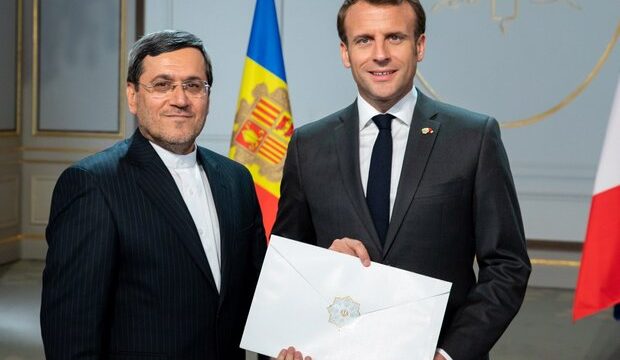 MNA – Iran’s Ambassador to Spain and accredited Ambassador to Andorra Hassan Ghashghavi submitted his credentials to French President Emanuel Macron and co-prince of Andorra on Tuesday.

The Iranian envoy highlighted Iran’s firm stance on adhering to all its commitments under the 2015 nuclear deal, known as the Joint Comprehensive Plan of Action.

Pointing to the verification of Iran’s fulfillment to JCPOA by the International Atomic Energy Agency, Ghasghavi stressed the need for all the parties to the deal to comply with their related commitments.

The official also urged the need for operationalizing INSTEX as soon as possible. INSTEX is a special-purpose vehicle (SPV) established in January 2019 by France, Germany and the UK to facilitate non-dollar trade with Iran in a move to counter the US’ unilateral sanctions against the Islamic Republic.

Macron, for his part, highlighted the significant role of Iran in the Middle East, saying that France is determined to save the JCPOA and tries to execute INSTEX at the earliest.