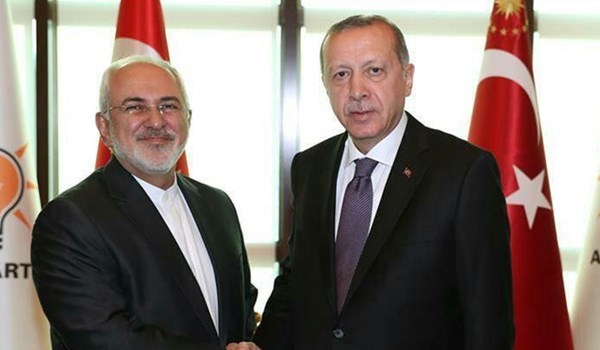 Heading a delegation, Zarif, who traveled to Ankara on Tuesday night, talked about bilateral, regional and international issues, IRNA reported.

Two Foreign ministers responded to questions from reporters at a joint news conference. This is the second Iranian foreign minister’s trip to Turkey over last month, which is to be held one day after the trip to Syria and talks with the Syrian authorities.

The Iranian foreign minister arrived in the Syrian capital Tuesday on a day-long visit.

Javad Zarif said on Tuesday that Tehran believes in political solution to the Syrian crisis with the regional countries.

“We hope to help solve regional problems too,’ Zarif told reporters upon arrival in the Turkish capital.

Prior to his visit to Ankara, Zarif visited Damascus at the invitation of Syrian President Bashar al-Assad.

Elaborating on his Damascus visit, Zarif described his meetings with the Syrian officials as ‘very good’.

“Talks with President Assad were very fruitful,” the Iranian foreign minister said, adding that good negotiations were held about the upcoming Astana talks on Syria and the mutual cooperation.

In Syria, ways to implement mutual agreements were also discussed by the two sides, the top diplomat noted.

Elsewhere in his remarks, Zarif referred to discussion with the Syrian officials about the situation of eastern part of Euphrates and Idlib in northwestern Syria.

Expressing concern over such situation, the top diplomat stressed the importance of exit of foreign forces from Syria and halt to the presence of terrorists in the country.

Then, he elaborated on his Ankara visit, saying he is due to hold talks with Turkish officials on mutual cooperation and regional developments, including Syria and the issues related to North Africa.