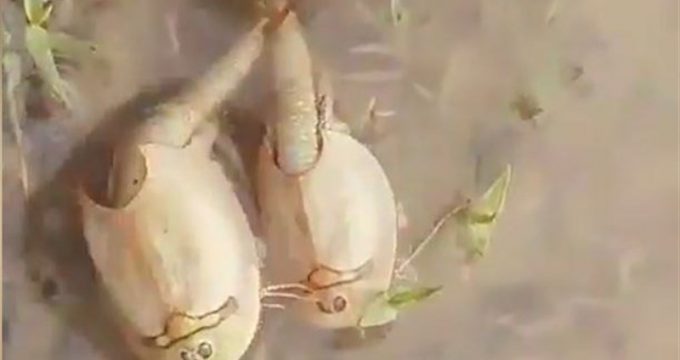 Tasnim – An endangered tadpole shrimp, also known as ‘Triops Cancriformis’ was spotted by nature lovers in southeastern province of Sistan and Balouchestan following the recent heavy rainfall that brought Hamoun wetland to life and is said to be the world’s oldest creature.

The Hamoun wetland which suffered prolonged drought is now filled with water following the recent raining in the border region between Iran and Afghanistan.

Different animal and plant species in the area as well as Triops Cancriformis which is mostly found in Europe, the Middle East and parts of India have found new chance to survive and continue their life in the distinct ecosystem that is inundated by water.

Triops Cancriformis is considered the oldest living species on the planet at around 200 million years old.

Due to habitat destruction, many of their populations have recently been lost across its European range, so, the species is considered endangered in the United Kingdom and in several European countries.

Despite the great amount of destruction that was left by the flooding in the country, the recent raining has given a second chance to the wildlife that have previously been forced to live their habitats in the country as earlier this month two dolphins were also spotted by people in Iran’s only navigable river of karun in the city of Khoramshahr.

Water levels of Karun River has increased recently and river waters rose around the cities of Ahvaz and Karun due to the raining.