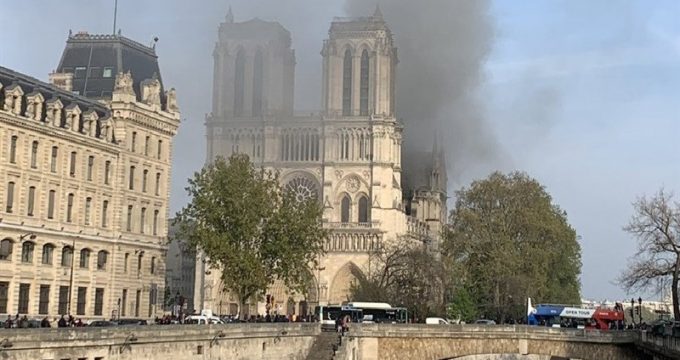 Tasnim – As Notre Dame burned, world leaders, millions of people around the world publicly expressed their sorrow at the damage wrought by the fire and expressed solidarity with the French people at the devastation of a national symbol.

The French president, Emmanuel Macron, said he was “sad to see this part of us burn”, later tweeting that the cathedral would be rebuilt and announcing an international fundraising campaign to pay for reconstruction, the Guardian reported.

“It’s part of our French destiny,” he said. “Tomorrow a national fund will be launched, and well beyond our borders.”

His predecessor as president, François Hollande, declared: “Notre Dame is our common heritage, it’s a wound to see her ravaged by the flames. Respect to the firefighters who are working to extinguish the fire.”

The Vatican said Pope Francis “has seen with shock and sadness the news of the terrible fire that has devastated the Cathedral of Notre Dame, symbol of Christianity in France and in the world”.

US President Donald Trump tweeted: “So horrible to watch the massive fire at Notre Dame Cathedral in Paris. Perhaps flying water tankers could be used to put it out. Must act quickly!” The US president later tweeted: “God bless the people of France!” after his firefighting suggestion appeared to be directly dismissed by French authorities.

Trump’s former Democrat rival in the 2016 presidential race, Hillary Clinton, tweeted: “My heart goes out to Paris. Notre Dame is a symbol of our ability as human beings to unite for a higher purpose – to build breathtaking spaces for worship that no one person could have built on their own.”

The former US president Barack Obama tweeted a photo of himself, his wife and his daughters inside the gothic landmark during a visit to Paris, along with the message: “Notre Dame is one of the world’s great treasures, and we’re thinking of the people of France in your time of grief. It’s in our nature to mourn when we see history lost – but it’s also in our nature to rebuild for tomorrow, as strong as we can.”

Trump’s vice president, Mike Pence, said it was “heartbreaking to see a house of God in flames”, describing the cathedral as “an iconic symbol of faith to people all over the world”.

The British Prime Minister, Theresa May, tweeted that her thoughts were with the people of France and the emergency services “who are fighting the terrible blaze at Notre Dame Cathedral”.

The archbishop of Canterbury said he was praying for “the firefighters tackling the tragic Notre Dame fire”. Justin Welby tweeted that he was also praying “for everyone in France and beyond who watches and weeps for this beautiful, sacred place where millions have met with Jesus Christ”.

The German chancellor Angela Merkel’s spokesman wrote on Twitter: “Fluctuat nec mergitur”, a Latin phrase roughly meaning “she is tossed by the waves but does not sink” which has been used as the motto of Paris since the 14th century, when Notre Dame was completed.

Leaders from other countries including Australia, Egypt, Greece, Italy, Japan, Lebanon, Poland, and Spain also expressed their sadness and said their thoughts were with the people and leadership of France.

The UN secretary general, Antonio Guterres, tweeted that he was “horrified” by the destruction of the cathedral, which he called “a unique example of world heritage that has stood tall since the 14th century”.

The president of the European commission, Jean-Claude Juncker, said our Lady of Paris “belongs to the whole of mankind”, describing the fire as a “horror” of which “Notre-Dame de Paris is the prey”. Meanwhile, Donald Tusk, th e president of the EU council, said: “Notre Dame of Paris is Notre Dame of the whole of Europe. We are all with Paris today.”

The European parliament chief Brexit negotiator, Guy Verhofstadt, said he was “so sad” to see the destruction. He tweeted: “My thoughts are with the people of France as a masterpiece of European gothic is at risk of being destroyed.”