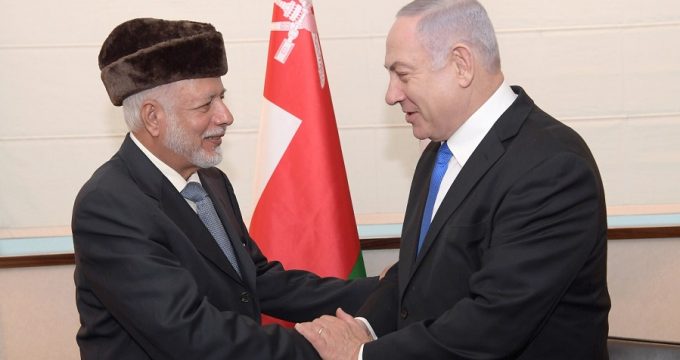 Alwaght – The Omani Foreign Minister Yusuf bin Alawi in a speech delivered to the World Economic Forum for the Middle East and North Africa on April 6 said that the Arab countries should help ease the Israeli security concerns so that Tel Aviv can stop its hostile policies in the region.

This latest stance by the Persian Gulf, which comes nearly half a year after hosting the Israeli Prime Minister in Muscat, is taken while the Israeli regime keeps its destabilizing policies in the region including the airstrikes is Syria, atrocities against the Palestinians, and building new settlements in occupied Palestinian lands. What is deriving Muscat to take such a path towards Tel Aviv? And what would be the possible consequences?

The geographic position of Oman, a small emirate in the east of the Persian Gulf, gives the nation a different role in the Arab-Israeli relations. Small and away from the spots of regional dispute, Oman did not take part in any Israel-Arab war. In 1978, Muscat leaders supported the Camp David peace process, stirring tensions between Oman and the Arab countries skeptical of the initiative.

The country first sought to back the peace negotiations between the Israelis and Palestinians, hoping for a fair deal to come out of the so-called pro-peace engagement. The country also took a role in 1991 Madrid peace conference, an event leading to the small Arab monarchy engaging in limited commercial ties with the Israeli regime. At the time, Oman developed a positive vision of Yitzhak Rabin, then Israeli prime minister. In the middle of such tendency, first Israeli PM visited Oman in 1994. However, the start of the second Palestinian intifada, or uprising, against the Israeli occupation shattered Muscat’s hopes for an Israeli-Palestinian agreement. This pushed Oman to decide to totally cut off relations with the Israeli regime.

What are the goals of the new Omani stances?

Since the late 1970s, Oman leaders took a moderate role and moved in line with the direction of the regional developments in hope of a peace deal. But no deal was reached and Tel Aviv’s expansionist policies continued.

Embarking on a new political path, Oman government since last year assumed that elevation of the Israeli security worries will result in Israeli-Arab peace. First it developed its secret ties with Tel Aviv then publicized them with Benjamin Netanyahu’s visit to Muscat in October 2018.

Netanyahu, however, eyed a goal different from that of the Omanis. He propagandistically promoted the visit as a huge achievement to his foreign policy. He intended to highlight that the Israeli regime moved close to Iran’s southern borders after establishing alliances with Iran’s northern and western neighbors, Azerbaijan and Iraq’s Kurdistan region, for the final goal of exhibiting Oman a new ally to Tel Aviv beside Saudi Arabia, the UAE, and Bahrain against the Iran-led Axis of Resistance that also covers Iraq, Lebanon, Yemen, and Syria.

The developments after the visit proved to the Omani rulers that the regime, which over the past decades has been a culprit in various regional developments, had no intention to make concessions to the Palestinians in favor of tension de-escalation and that Netanyahu remains a highly hardline adversary to the Palestinians with a thirst to violent policies against them.

What are the ramifications?

Oman does not look it has decided to become another ally to Tel Aviv against the Axis. Rather, it sets up its policy on the principle of mediation and moderation between the regional sides. For example, Muscat has maintained its relations with Iran beside high-level relations with the US. It sometimes worked as a mediator in Iranian-American diplomats’ talks. Now that Saudi, Emirati, and Bahraini normalization efforts rise to the surface, Oman seeks to seize the opportunity to play as a mediator in a possible regional deal on Palestine in an effort not to fall behind the Saudis, an attitude seemingly stemming from a misunderstanding of the regional conditions by the Omani officials.

History shows that Israeli regime’s racist and anti-Arab approach which has its roots deep into a broader Israeli strategy is too dangerous to allow for such a shift in Oman position towards the Israeli regime. The fact is that the normalization efforts started last year with Tel Aviv paves the way for misuses by the Israeli foreign policy designers, with one ramification being undermining Muscat’s balancing role in regional equations.

While the Israeli violence and repression against the Palestinians have been disparaged by the international organizations repeatedly, the Arabs’ flexibility will only be instrumentalized by the Israeli leaders to whitewash 70 years of their war crimes in Palestine and ease the international pressures they are under currently.

Such a policy not only will not improve Muscat’s prestige and credibility in the eyes of the regional and Muslim public but also will cause home dissent. After Netanyahu’s visit, Omani protestors took to the streets, set fire to the Israeli flag, and condemned their government’s review of policy toward the “criminal entity.”

The current situation shows that Muscat’s softened policy towards Tel Aviv will be deemed a stab in the back by Arab countries like Jordan, Syria, and Lebanon which are highly in a flap about the dangerous results of the US-sponsored “deal of the century” which remains a secret but Western media leaks show Trump administration wants to legitimize the Israeli occupation and deny Palestinians, a large number of them living in the three Arab states, their right to return home. Jordan, a frontrunner of normalization which understands that nothing comes out of compromises to the Israelis, immediately responded to Oman position. Ayman Safadi, Jordanian FM, rejected Muscat’s view, saying that the main problem is that the Israeli regime does not want to retreat from the occupied territories and allow an independent Palestinian state to come to existence.

The conclusion is that the policy of Israeli recognition is a tested and failed one. Repeating this mistake will not bring favorable results and will only lead to a sharpened spirit of Tel Aviv to use further violence against the Palestinians.