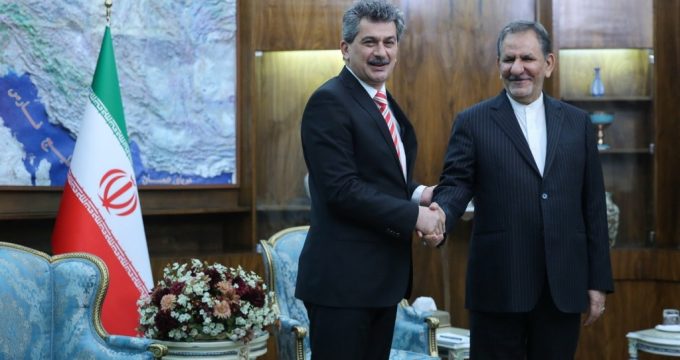 Tehran and Ankara have good potentials for elevation of their trade exchange to reach the targeted goal of 30 billion dollars, Eshaq Jahangiri said.

He made the remarks in a meeting with Turkish Ambassador to Tehran Derya Ors.

The Iranian official congratulated the Turkish ambassador the victory of Justice and Development Party (AKP).

Jahangiri expressed the hope that Iran and Turkey relations are developed during the new ambassador’s tenure.

Deepening cooperation between Tehran and Ankara can help resolution of problems in the Islamic World and the region, he added.

Jahangiri said that Iran and Turkey should develop their bilateral relations, in particular, the banking relations regardless of the US sanctions.

In the meantime, the Turkish envoy, for his part, called for promotion of all-out ties between the two states.

The envoy stressed removal of obstacles in the way of banking reactions as well as the use of national currencies for trade exchanges between the two states.

He said that Iran and Turkey share similar stance on Syria, and expressed the hope that the Syrian crisis is resolved in the near future.