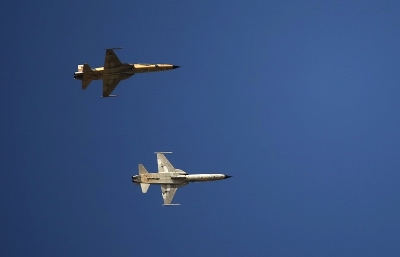 Press TV – The deputy commander of the Iranian Army’s Air Force says domestically-built Kowsar and Saeqeh bombers will for the first time take part in an annual military parade, which marks the National Army Day.

Brigadier General Hamid Vahedi made the remarks on Tuesday on the sidelines of an exercise session featuring the Islamic Republic of Iran Air Force (IRIAF) fighter jets ahead of the April 18 Army Day parade.

“The major difference between this year’s parade and those held in previous years is that it will include Kowsar and Saeqeh domestic hunter bombers,” said the commander. “This will prove to the world that [the US] sanctions will stop short of impeding us.”

In addition to Kowsar and Saeqeh, MiG-29, F-4 Phantom and F-14 Tomcat warplanes will take part in the upcoming parade. The maneuvers will also feature KC-747 and KC-707 aerial refueling tankers, which will be flown from bases situated in the cities of Tabriz, Tehran, Hamedan and Isfahan.

During Tuesday’s exercise, IRIAF pilots performed sorties by MiG-29, F-5 and Saeqeh fighters over Tehran and the mausoleum of Imam Khomeini, the late founder of the Islamic Republic.

Kowsar for the first time took part in the exercise.