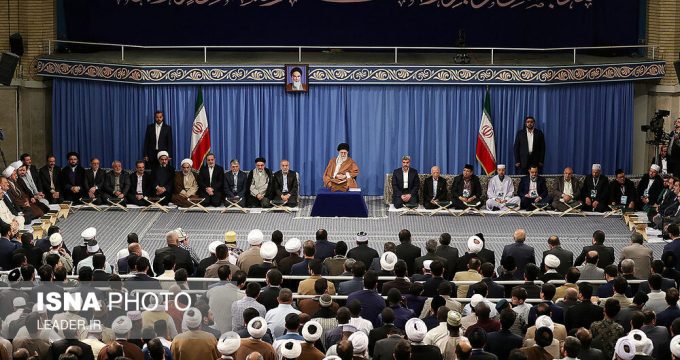 Press TV – Leader of the Islamic Revolution Ayatollah Seyyed Ali Khamenei has blasted leaders of “certain Islamic nations” for serving Israel and the United States in stark contrast to the teachings of Islam’s holy book, the Qur’an.

“Many wrongdoings, misunderstandings, despairs, disloyalties, hostilities and submissions to tyrannical powers result from estrangement with the Qur’an, and the spirituality and knowledge that come with it,” the Leader told reciters and researchers of the holy book in Tehran Monday.

“Unfortunately, the rulers of some Islamic countries do not adhere to Qur’anic teachings and instead of being ‘harsh against the unbelievers,’ they have become servants and followers of America and the Zionists; and instead of being ‘merciful to one another,’ they pave the way for divisions and wars, like the wars in Yemen and Syria, and the massacre of Muslims.”

Addressing the closing ceremony of the 36th International Qur’an Contests, Ayatollah Khamenei said, “Today, many leaders of Arabic countries are of this kind.”

The Leader noted that some of those rulers “colluded with Israelis and stepped on the blood of Palestinians.”

Over the past years, leaders of some Arabic countries, namely Saudi Arabia and the United Arab Emirates, have led overt and covert efforts to normalize ties with the Israeli regime.

Israeli Prime Minister Benjamin Netanyahu has on many occasions hinted at extensive security and political dealings with Arab nations that largely remain a secret upon the request of their leaders.

Ayatollah Khamenei pointed to the Riyadh regime’s deadly war against Yemen, which has killed thousands of civilians since its onset in March 2015.

“Today Yemen is being constantly bombarded. Who is doing the bombing? Is he an unbeliever? No! He is a Muslim; at least he appears to be a Muslim,” the Leader continued.

The UAE and several other Arab countries in the region have been helping Riyadh with the unprovoked war, led by Saudi Crown Prince Mohammed bin Salman.

‘Enemies in their death throes’

Ayatollah Khamenei said unlike some Islamic nations, Iran is putting the Qur’an at the heart of its decision-making, “no matter how angry this makes them (the enemies).”

“Although today the hostilities look more than they were in terms of both volume and intensity, these actions and conspiracies are the last throes of our enemies’ enmity with the Islamic Republic.”