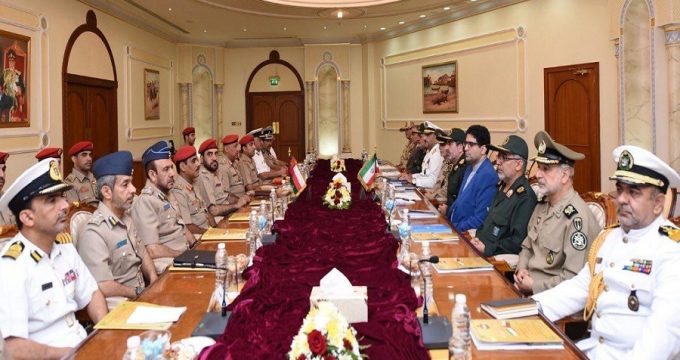 MNA – The annual meeting of the Omani-Iranian joint military commission opened on Sunday at the venue of the General Staff of the Armed Forces of the Omani Sultanate in Muscat.

The ongoing five-day meeting, which marks the 15th joint commission of Iran-Oman military friendship, is chaired by the deputy head of the General Staff of the Iranian Armed Forces Ghadir Nezami and Assistant SAF Chief of Staff for Operations and Planning of Omani General Staff Brigadier Hamad bin Rashid al Balushi.

During the first day of the meeting, the two sides discussed a range of topics that would contribute to strengthening ties of the existing cooperation in military fields between the two friendly countries.

Activities of the joint commission were also reviewed during the talks.

The Iranian military delegation is set to meet with a number of high-ranking officials of the Omani Sultanate. A meeting on the implementation of a joint relief drill will also be held between the representatives of the Iranian and Omani navy, air force and border guards.

The talks will conclude on April 18.