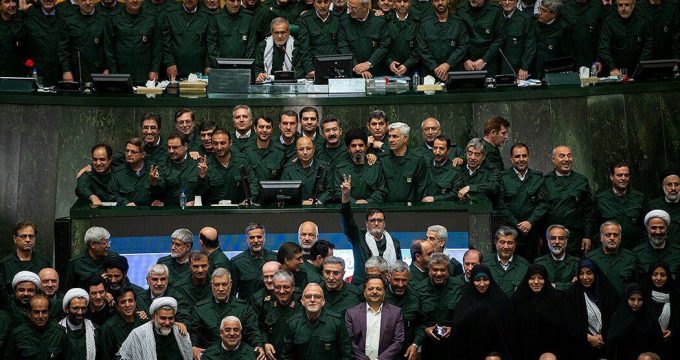 The US President Donald Trump has labelled Iranian Revolutionary Guards as a foreign terrorist organization to support Benjamin Netanyahu just one day before Israeli elections.

The Iranian Foreign Minister Mohammad Javad Zarif has blasted the US’s action in naming the IRGC terrorists as a gift to Benjamin Netanyahu ahead of tomorrow’s Israeli elections; .

Iran’s Supreme National Security Council (SNSC) has decided to designate the US Central Command-the CENTCOM-and the related forces as a terrorist organization in reaction to US similar action against the IRGC.

Iranian Parliament Speaker Ali Larijani said that designating the Islamic Revolution Guards Corps (IRGC) as a terrorist entity will have dire consequences for Washington, adding that he thinks that the White House is not that much senseless to risk the move.

The Iranian lawmakers were sporting Islamic Revolution Guards Corps uniforms at a Tuesday’s session of the parliament to express solidarity with the IRGC official military force which has been blacklisted by the US government.

China and the European Union have once again reaffirmed their commitment to the “continued, full and effective” implementation of a 2015 multilateral nuclear agreement as a leading factor in the global non-proliferation architecture.

Iranian lawmakers on Tue. signed a ‘triple-urgency’ bill, the highest designation of importance, on labeling the US Central Command as a terrorist group.

Iran’s nuclear chief Ali Akbar Salehi says the reimposition of US unilateral sanctions has been, and will continue to be, unable to make the slightest dent in the country’s resolve to advance its nuclear technology projects.

Leader of the Islamic Revolution Ayatollah Seyyed Ali Khamenei says the recent decision by the United States to designate Iran’s Islamic Revolution Guards Corps (IRGC) a “foreign terrorist organization” is rooted in America’s “rancor” against the force, which has been on the forefront of the fight against Iran’s enemies.

Victories and capabilities of IRGC have made the US and the Israeli regime angry, Iranian Defense Minister Brigadier General Amir Hatami said on Tuesday in a released statement.

Iran’s deputy director of the presidential chief of staff, Majid Takht-Ravanchi, has been appointed as the Islamic Republic’s permanent representative to the United Nations.

Iranian President Hassan Rouhani on Tuesday accused the United States of being the real “leader of world terrorism”, hitting back after Washington blacklisted Iran’s Revolutionary Guards as a terrorist organisation.

The General Staff of Iranian Armed Forces have issued a statement to condemn the US terrorist designation of IRGC, declaring that the armed forces will spare no efforts in fight against terrorist US CENTCOM.

If US troops do a damn thing, we will respond vigorously: Iran military chief

The Chief of General Staff of Iranian Armed Forces Major General Mohammad Hossein Bagheri says “we consider the US troops in West Asia as terrorists and if they do a damn thing, we will confront them vigorously.”

The presidents of the Islamic Republic of Iran and France had a phone conversation on Tuesday evening to discuss and exchange views on the most important bilateral, regional and international issues.

FM: Trump’s move against IRGC new US adventurism in region

Taking another step forward, US will be distressed: Rouhani

“The US knows that if it takes another step forward, it will suffer great distress,” Iranian President Hasan Rouhani said in a cabinet meeting on Wednesday.

Iranian foreign Minister in a message referred to president Trump’s confession as regard Iran fight against ISIS terrorists raising the question that who from Iran did the fight.

The first trilateral meeting between the foreign affairs committees of parliaments of Iran, Turkey and Russia has been held in Moscow. The participants have held talks to promote peace and stability in the region.

Zarif holds US accountable for consequences of anti-IRGC adventurism

In a letter to the UN chief, Iran’s Foreign Minister Mohammad Javad Zarif cautioned that the US and a number of puppet regimes will be held accountable for the dire consequences of the adventurous move to blacklist the Islamic Revolution Guards Corps (IRGC).

Iranians have held nationwide rallies to express support for the Islamic Revolution Guards Corps (IRGC) following US blacklisting of the popular force.

Iran has shut down some oilfields in Khuzestan province as intensive efforts are underway to control damage from flash floods and prevent possible environmental pollution, Minister of Petroleum Bijan Zangeneh says.

Military parades held to mark the National Army Day will not be held in Iranian flood-stricken areas this year so that the army forces can continue with providing relief to flood affected people, Iranian Army Commander said on Friday.

A host of members of the Iranian Parliament have proposed a bill, according to which countries supporting US sanctions on Iran will face punitive measures, including a ban on oil trades.

Iranian Foreign Minister Mohammad Javad Zarif in a message revealed the reason behind conflicts waged by the US in the region.

The performance of four vice-presidencies, the Ministry of Sport and Youth Affairs, and the Central Bank of Iran, and their plans for the new year were reviewed in separate meetings with President Hassan Rouhani.

Slovenia ready to kick off INSTEX

An official at the Slovenian foreign ministry said on Monday that Ljubljana voices readiness to kick off new financial cooperation with Iran named as instrument for support of trade exchanges (INSTEX).

Minister of Industry, Mine and Trade Reza Rahmani said that Islamic Republic of Iran will open a trade and business office in Turkey, Syria, Lebanon and Iraq.

US’ blacklisting of IRGC not to influence Iranian markets

The US move to brandish IRGC as a terrorist group will have no impact on stability in Iranian domestic markets, Governor of the Central Bank of Iran (CBI) announced.

South Korea is trying to obtain another exemption from the US sanctions that enables Seoul to continue importing oil from Iran despite sanctions, an informed source said.

IPU condemns US recognition of Golan Heights as part of Israel

The President of the International Parliamentary Union (IPU) Gabriela Cuevas Barron issued a statement condemning a recent move by the US in recognition of Syrian Golan Heights as Part of Israel.

At least 16 people have been killed and another 30 wounded as an explosion ripped through a market in the southwestern Pakistani city of Quetta, police said.

More than a dozen civilians, most of them schoolchildren, have been killed in the latest round of airstrikes by Saudi warplanes on residential areas in Yemen’s west-central province of Sana’a and the southwestern province of Ta’izz.

Damascus says its air defenses have intercepted some of the Israeli missiles fired at a Syrian military base near the city of Hama, while the remaining missiles hitting the target have destroyed several buildings and injured three Syrian soldiers.

In a tweet, Taliban spokesman Zabihollah Mujahid said that the Afghan armed group launched a missile at Bagram Air Base, the largest US base in Afghanistan, on Thursday morning.

The governor of Iran’s southwestern province of Khuzestan said a major dam on the Karkhe river has overflown and local residents in a number of cities and villages, including Soosangerd, have been ordered to leave their homes.

At least 7 killed in chain reaction crash near Iranian capital

At least seven people were killed and seven others injured in a chain reaction crash on Tehran-Saveh highway on Thursday, said the emergency services spokesman, Mojtaba Khaledi.

Member of Education and Research Committee of Iranian Parliament Mahmoud Sadeghi said Iran university entrance exam will be postponed because of the requests of students who are in flood-affected areas.

Relief operations in Iran’s flood-affected areas is gaining momentum as the Red Crescent Society mobilizes to dispatch much-needed aid to the flood areas in the north and southern regions, including tents, water, food packages, blankets and moquette.

The World Health Organization (WHO) airlifted essential medical supplies to the Islamic Republic of Iran to respond to the growing health needs of thousands of people who have been displaced as a result of the flooding in many provinces in the country. The supplies include trauma, health, cholera and non-communicable disease kits and other commodities requested by the Ministry of Health and Medical Education.