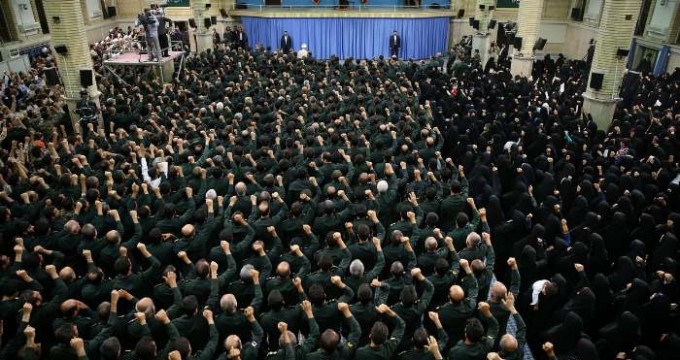 US regional interests at stake after IRGC ban: Iranian expert

Alwaght – On Monday, in a highly controversial move, the US government added Iran’s official military Islamic Revolutionary Guards Corps (IRGC) to its terror list. The decision faced firm response from Tehran. In a reciprocal step, Iran’s parliament said the country will deal with the US military forces in West Asia region as terrorists. Since then, speculations about the consequences of the White House move have become a top news and analysis matter for the global media. Alwaght has talked to Saadullah Zarei, an Iranian regional affairs expert, in an effort to throw light on the issue.

Commenting on the reasons behind US President Donald Trump’s decision, Mr Zarei said that Americans have designed a set of measures to put extensive pressure on Iran’s economy. They introduce sanctions gradually so that the economic pressure does not fall out of the headlines. Their main goal is economically-motivated and want to push the Iranian economy to an impasse. He continued that the IRGC was targeted because the main tool for the country’s economic stability is security.

“As everybody knows, in the world economy, the security stability is a precondition to investment and economic prosperity. The IRGC is a provider of the nation’s home security. Such stability enables the country to absorb economic shocks. They hope that by labeling the IRGC as a terrorist organization Iran is stripped of its security and finally the foreign investors are dissuaded from investment in the Islamic Republic that remains an island of stability in the middle of heavy regional chaos.”

The second reason, according to him, is that the region is on its way to the second wave of Islamic awakening, referred to by Iran’s Leader Sayyed Ali Khamenei during his “Second Step” statement that draws the roadmap for Iran’s next half-a-century policy.

“The Americans have decided that Saudi Arabia as their ally will not be immune from the upcoming wave of uprisings due to the internal discontentment and the gaps among the royalty, as well as the kingdom’s extremist policies in the region. Of course, the only country that can manage the wave of awakening is Iran. In the new order, it is the IRGC that can play the biggest role. So, the US is aiming at it with the hope to bring under its control and management the future situation.”

Being asked how the White House measure could influence the Revolutionary Guards’ regional strategies and performance, Mr. Zarei replied “There are no influences.” Essentially, the IRGC has not built its strategies on the relations with Washington. The Iranian military force has usually been a target of the American criticism, with the Americans always referring to it as an obstacle to their regional policies. They blame the failure of their war of terrorism against Syria and Iraq and in many other regional cases on the IRGC’s role. Even after the ban, the IRGC will keep going ahead according to its agreements with other governments and will be disconnected from Washington’s opposition or happiness.

Alwaght asked what consequences the US interests in the region will be exposed to after the anti-IRGC move. “Certainly, as the regional atmosphere grows further tense, the force will fewer justifications for regional presence will see the harm. For example, the Islamic Republic’s presence in Iraq comes with the official request of the Iraqi government as the country fought the ISIS terrorist group. Iran ended its presence in Iraq after the terrorist group was obliterated. None of the regional countries hit by terror waves label the IRGC a terrorist entity. On the contrary the find it a strong helper. On the other hand, the US officials have repeatedly insisted that Washington created ISIS and pave the ground for it to get some entrenchment in the region. This is viewed as a dangerous threat by the regional governments. It will bring many damages and ramifications. So, should the tensions escalate in the region, the Americans will be of weaker position.”

The expert continued that Americans know that the Islamic Republic has many friends and supporters in the region. Serious supporters who fought against ISIS and the US in an array of battles. So, when Tehran adds an entity to its terror list, it authorizes its allies in various regional states to deal blows to it. “This means that the US decision will be of consequences to the US in the region. The consequences have already started as we can see the American forces are now exposed to serious risks in Afghanistan.”

Mr Zarei continued that because the US aims to deal an economic, and not a military, blow to Tehran, Iran is expected to take effective retaliatory steps in response. “I tell you, right now hundreds of American companies are doing business with countries around Iran. If their business atmosphere faces security challenges, then they cannot continue their business. Iran will find ways to strike the US and its allies’ economic interests in the region.”

Touching on the global reaction to the US government’s labeling, Zarei said that a majority of the world countries have chosen to remain silent or openly oppose the White House move. Regionally, except for Saudi Arabia, the UAE, and Bahrain, none of the states are expected to support the American blacklisting.

“The issue will problematize the US presence in the region as it will divide the states with relations to Washington into two sides.  One side is the very large number of governments which will not support the US and the other side is a small group of governments that back the Americans. This is expected to hit hard Washington’s image and credibility on the international arena.”