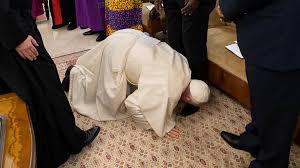 Tasnim – Pope Francis knelt to kiss the feet of South Sudan’s previously warring leaders on Thursday in a dramatic gesture to urge them to avoid civil war.

The Pope appealed to President Salva Kiir, his former deputy turned rebel leader Riek Machar, and three other vice presidents to respect an armistice they signed and commit to forming a unity government next month, Reuters reported.

“I am asking you as a brother to stay in peace. I am asking you with my heart, let us go forward,” the 82-year-old pontiff said after he performed the rare gesture.

President Salva Kiir and his rival, the former rebel leader Riek Machar, clashed in 2013 leading to a civil war that left 400,000 people dead.

But they signed a peace agreement last year that brought the war to an end.