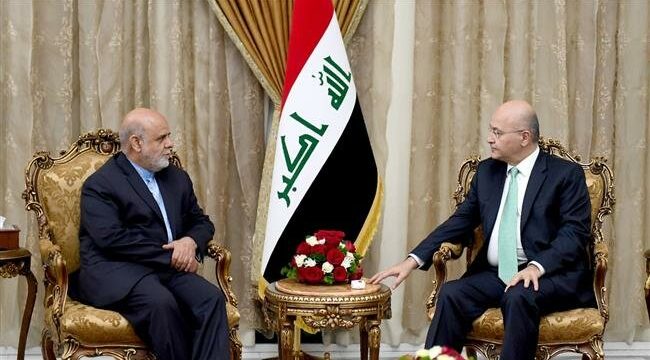 Iraq will be no starting point for action against neighbors, Salih assures Iran

Press TV – In a veiled warning to the US, President Barham Salih of Iraq says his country’s soil will not be a “starting point” for any action against its neighbors, two days after Washington blacklisted an elite Iranian military force, which greatly contributed to the collapse of the Takfiri Daesh terror group in the Arab country.

Salih made the remarks in a meeting on Thursday with Iranian Ambassador to Iraq Iraj Masjedi in Baghdad, where the two sides exchanged views on bilateral ties and other issues of mutual interest, according to a statement by Iraq’s Presidential Office.

During the talks, Salih praised Iran for backing Iraqi armed forces in their counter-terrorism battles, which led to the fall of Daesh in the Arab country in late 2017.

The Iraqi president also “stressed that Iraq would not accept to be a starting point for any action that would harm its neighbors or strain the regional situation,” underlining the need for mitigating tensions in the already-troubled region.

Salih further expressed “Iraq’s keenness to be an arena for convergence of interests of the countries and peoples of the region.”

The Iranian envoy, in turn, said the Islamic Republic wants close Tehran-Baghdad cooperation and continues to stand by the Iraqi nation in all arenas, according to the statement.

In a swift tit-for-tat move, Iran’s Supreme National Security Council (SNSC) slammed the US government as supporter of terrorism, and designated American forces in West Asia, known as the United States Central Command (CENTCOM), as a terrorist organization.

Washington’s unprecedented move sparked criticism from several countries around the world, which say blacklisting another country’s military runs counter to international regulations and could lead to further instability in the restive Middle East region.

Inside Iraq, a number of political factions as well as the Popular Mobilization Forces, which had received advisory assistance from Iran’s IRGC in the course of their fight against Daesh, denounced the designation.

Prior to talks with Masjedi, Salih had sat down with Kenneth McKenzie, CENTCOM’s commander, at the Presidential Palace in Baghdad on Wednesday, where he called for efforts to reduce tensions in the region.

Military advisors with the IRGC’s Quds Force — led by Major General Qassem Soleimani — rushed to the help of Iraqi army forces and allied volunteer fighters at Baghdad’s request in 2014, when Daesh first unleashed its campaign of terror in the Arab country and made sweeping territorial gains there.

Backed by Iran, Iraqi forces managed to undo Daesh’s gains and liberate the entire country from the clutches of the world’s most notorious terror group three years later.

Hadi al-Ameri, the head of Iraq’s Badr Organization — a part of the Popular Mobilization Forces — once credited Tehran and Soleimani with saving the Baghdad government when Daesh emerged in Iraq.

Baghdad had delivered similar warnings to the US earlier this year after Trump angered Iraqis by announcing that American forces must remain in Iraq despite the defeat of Daesh so Washington can keep a close eye on Iran.

Besides Salih, Masjedi also met with Chairman of the Islamic Supreme Council of Iraq Ammar Hakim and ex-president Fuad Masum.

Commenting on his discussions with Iraqi officials on Thursday, Majedi told reporters that he took the opportunity to convey Tehran’s stance on Washington’s “unwise” and “stupid” move against the IRGC.

Iran is “surprised that the fate of a country like the United States has fallen into the hands of an individual who is committed to no policies or regulations.”

“It was necessary for us to let the Iraqi side and our friends know about our views and stance as well as our expectation from them,” the Iranian diplomat added.