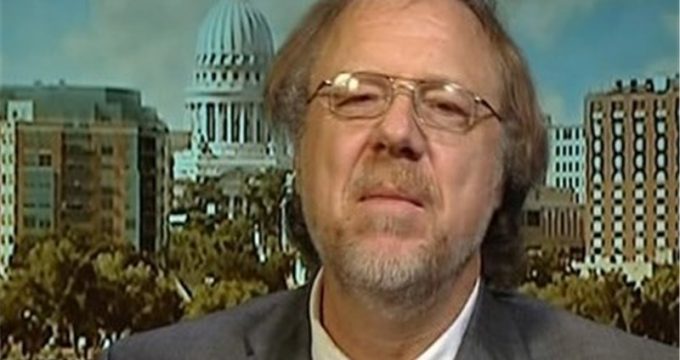 Tasnim – An American political commentator described US President Donald Trump’s move to blacklist the Islamic Revolution Guards Corps (IRGC) as “insane” and “self-defeating”, saying that the force is the “leading regional force fighting against the actual terrorists”.

“Iran’s IRGC … does not intentionally or systematically target civilians. On the contrary, it is the leading regional force fighting against the actual terrorists, the groups that really do intentionally and systematically target civilians, namely, Israel and Daesh. So to be accurate, the (US) State Department should change its statement and designate the IRGC as the world’s leading anti-terrorist group,” Kevin Barrett told Tasnim in an interview.

Tasnim: The Trump administration on Monday labeled IRGC as a terrorist group and said, “This unprecedented step, led by the Department of State, recognizes the reality that Iran is not only a State Sponsor of Terrorism, but that the IRGC actively participates in, finances, and promotes terrorism as a tool of statecraft”. What is your take on the move?

Barrett: Reckless, absurd, insane, self-defeating…there are no words to describe it. Undoubtedly, all of the actual Iran experts in the State Department opposed the move. But Trump’s political appointees, supported by however many Israeli agents have infiltrated the State Department—presumably quite a few of them—were apparently able to override truth, logic, and the US national interest and hand another gift to Trump’s boss Netanyahu.

The word terrorism once actually meant something: “A military tactic consisting of intentionally targeting civilians to spread fear.” But since the neocon-Zionist orchestrated false flag event of September 11 2001, the word terrorism has been systematically abused by the Zionist-dominated Western media. Today, terrorism means whatever the Zionists want it to mean. It is an empty slur used against everyone the Zionists perceive as an enemy.

And what makes the situation so Orwellian is that the Zionists are themselves the world’s worst terrorists. The book State of Terror by Thomas Suarez makes it clear that the settler colonial project known as “Israel” was created by terrorism and persists by terrorism. The entire Zionist project is one ongoing long-term systematic terror attack on a civilian population. And the Zionists are masters of false flag terror against their own people and their own supposed allies as well.

Today the Zionists routinely and as a matter of policy drop bombs and white phosphorous on schools, hospitals, ambulances, UN installations, and other civilian targets. Their snipers routinely and as a matter of de facto policy lure children within reach of their guns and murder them for sport, as Chris Hedges describes in his article “Gaza Diary.”

Iran’s IRGC, by contrast, does not intentionally or systematically target civilians. On the contrary, it is the leading regional force fighting against the actual terrorists, the groups that really do intentionally and systematically target civilians, namely, Israel and Daesh. So to be accurate, the State Department should change its statement and designate the IRGC as the world’s leading anti-terrorist group.

Tasnim: Later in the day, Iran’s Supreme National Security Council in turn designated US forces in West Asia, known as the United States Central Command (CENTCOM), as a terrorist organization. What are your thoughts on this?

CENTCOM’s official policy is to try to avoid or at least limit civilian casualties, which it euphemistically calls “collateral damage.” But because its main mission is to force entire peoples into subjugation to the US empire, it inevitably finds itself fighting civilians and guerrilla forces that enjoy mass support among civilians. So it ends up murdering far more civilians and becoming a bigger terrorist organization, than even the born-and-bred terrorists like Israel and DAESH.

According to Chomsky and Vltcheck’s On Western Terrorism, the US has murdered roughly 60 million people in military and CIA invasions and interventions since World War II. And according to Australian scientist Dr. Gideon Polya, the US has murdered 27 million people in predominantly Muslim countries since the 9/11 false flag event, which was a carefully designed psychological operation whose purpose was to trigger that very wave of mass murder.

So despite CENTCOM’s protestations that it doesn’t “intentionally” target civilians, it could accurately be called the most murderous and destructive terrorist group on earth.

Tasnim: As you know, Trump announced the decision on the eve of Israel’s election. Netanyahu took credit for the move and said, “Thank you, my dear friend, President Donald Trump,” Netanyahu tweeted in Hebrew, “for answering another one of my important requests”. What do you think?

Barrett: For once in his life, Netanyahu is telling the truth. He really does own Donald Trump, whose entire career has consisted of serving as a front man for Jewish-dominated organized crime.

Prior to the 1990s, organized crime in the US and much of the Western world was controlled by the “boss of bosses,” the banker to the mob, Meyer Lansky. The young Donald Trump was anointed in the 1960s by Lansky’s New York lieutenant Roy Cohn and set up in the money laundering business. (Trump’s hotels and casinos are primarily devoted to money laundering, not hospitality or gambling.)

In the 1990s the Jewish-Russian mob took over America including most of what had previously been Lansky’s domain. The best book on this is Red Mafia by Robert Friedman, a brave Jewish investigative journalist who was murdered by the people he exposed. The “Russian” (really Zionist-Israeli) mob’s headquarters is the top section of Trump Tower.

“Russia-gate” was in reality a smokescreen designed to hide Israel-gate. Michael Flynn’s real crime was to act as an agent of Israel, not Russia, as he tried to undermine Obama’s Middle East policy prior to Trump taking office. In this, Flynn was obviously acting under orders from Trump and his Zionist handler, Kushner.

So yes, Netanyahu is right about his total control of Donald Trump. But if the Israeli and Jewish people think that is good for them in the long term, they are very sadly mistaken. As more and more people in the US and around the world learn the truth about these matters, popular anger is rising. Sooner or later, there will be hell to pay.