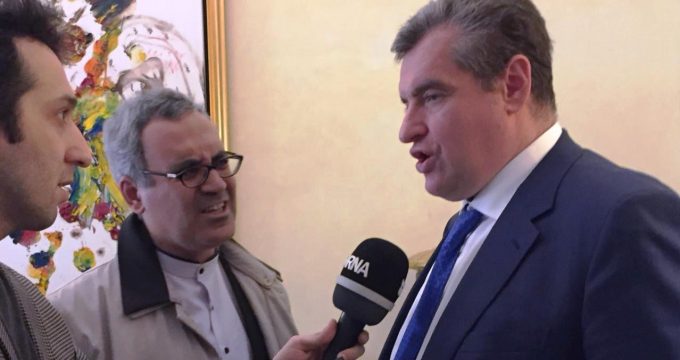 Russian parliament against US choice on IRGC

Speaking to IRNA in reaction to US recent hostile act, Leonid Slutsky said IRGC is an organization which safeguards Iran.

He added that the Commander of the IRGC Quds Force Major General Qasem Soleimani and his staff are following the policies of the Supreme Leader of the Islamic Revolution Ayatollah Seyyed Ali Khamenei to maintain security in Iran.

He stressed that Moscow is opposing such US decisions as sanctioning Iran and Russia and also its act of pulling out from Iran nuclear deal also known as the Joint Comprehensive Plan of Action (JCPOA).

The US President Donald Trump in a statement on Monday accused the IRGC of being ‘the Iranian government’s primary means of directing and implementing its global terrorist campaign’.

In reaction to the US designation, Iran’s Ambassador to London Hamid Baeedinejad said the US move against IRGC at a time when the Iranian military body is helping the flood-hit people with all in power is a gift to Israel’s Benjamin Netanyahu to assist him in the elections.

The latest anti-Iran move of Trump was also met with fierce reactions from Iranian officials.

The New York-based international daily newspaper ‘Wall Street Journal’ tried to justify the decision as a move which was designed as ‘a step that would vastly escalate the American pressure campaign against Tehran, but which has divided the US officials’.

The Iranian forces in coordination with governments in Iraq and Syria have played a military advisory role in fighting the terrorist group in both countries. Iraq in 2017 officially announced the defeat of Daesh, while Syria has managed to retake most of the fallen areas from the terrorists thanks to IRGC assistance.