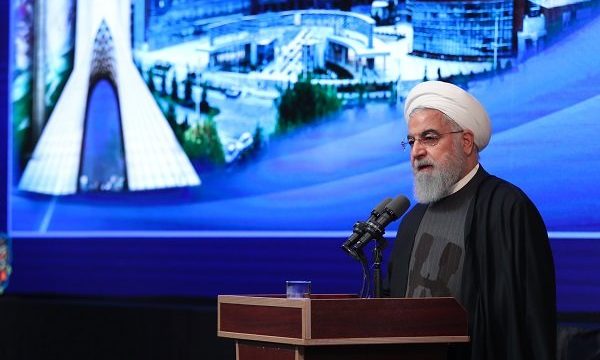 Enemies seeking to compensate for failures by banning IRGC: Rouhani

MNA – Iranian President Hassan Rouhani said that enemies of Iran are after compensating for failures by designating IRGC as a terrorist organization.

He made the remarks while addressing a ceremony in Tehran to commemorate the 13th anniversary of the National Day of Nuclear Technology.

He appreciated the efforts of the Islamic Revolutionary Guards Corps for safeguarding the interests of the country.

“IRGC has uprooted terrorism in Iran,” he said, adding that it was one of the first forces to help the regional countries in their campaign against terrorism.

The remarks came as US administration designated IRGC as a terrorist organization on Monday.

Rouhani went on address Washington, saying “you will not be able to hamper Iranian nation’s scientific progress,” adding that in the past, enemies were afraid of Iran’s IR-1 centrifuges but today Iran has succeeded to inaugurate IR-6 ones which proves US failure in hatching its plots against the Islamic Republic.

Iran has gained access to missiles beyond enemies’ imagination, he stressed.

US has made a big mistake by putting IRGC on its terror list and has sacrificed the interests of American people and others across the world for the interests of a host of Zionists, he added.

On the reason behind the formation of the IRGC, he said, “after the victory of the glorious revolution in Iran, many enemies in the region and the world wanted our revolution not to last more than a few weeks and months, so they hatched plots against us, one of which was forming a campaign of terror against the Iranian nation.”

“The enemies of the Revolution formed and trained terrorist groups and sponsored them to kill our people and officials, so that Iran would return to the days when it was under the American domination,” the official website of Iranian Presidency quoted him as saying.

“At that time, we needed a pious, devoted corps to stand against the US and guarantee peace and security for Iran,” hence the need for the formation of the IRGC.

He then referred to the 8-year Imposed War with Iraq, adding, “the day our enemies waged the war against us, announcing that they would have an interview in Iran the next week, all forces, at the top of them the IRGC, stood against the enemies that were armed to the teeth.”

The Iranian nation and the IRGC rushed to the help of Iraq and the Iraqi nation the night when Erbil and Sulaymaniyah were falling to the ISIL terrorist group, he said.

Raising the question of who are sponsoring and encouraging terrorists today, he said, “the US is not still ready to fight ISIL, and is sheltering their heads, supporting terrorist groups.”

“You use terrorist groups against the peoples of the region, and yet claim to have been fighting terrorism? You are at the top of terrorism in the entire world,” he said.

“What force was it that shot down our passenger plane over the Persian Gulf waters? You have always interfered in regional affairs, working against the people in this region.”

“After shooting down our airliner, you claimed that you mistook it for an F14 fighter, which is a childish claim. With this terrorist act, you wanted to say that you do not consider any red lines, and kill women and children. Your message was to support terrorism in the region,” Rouhani said to the US.

He continued, “what goal are you pursuing by the economic sanctions against the Iranian nation? If you claim that you can stop Iran’s progress and nuclear technology development through sanctions, you are gravely mistaken.”

“You were afraid of IR1 centrifuges, today we unveiled IR6, and if you continue to walk down this road, you will see IR8 in the near future … You thought that if you designate IRGC as a terrorist group anybody would accept that from you? Where has the inexperienced administration in the US been successful in the past two years? … You thought that if you speak against the IRGC, divisions would arise or you could reduce its popularity, but from today, IRGC’s popularity with Iranians and the region will rise.”

Today, Iran’s relations with countries of the region is better than before, he said, adding, “we have the best relations with regional and neighboring countries, except for a couple of countries which are responsible for the lack of relations, and we are ready to have good relations with all regional states.”

In another part of his speech, Rouhani stressed that Iran has exercised patience in many affairs until today, adding, “one of the 5+1 members violated all its commitments and proved that it is not trustworthy, therefore, we tell the remaining members that they have to focus on their responsibilities. We have waited and will continue to do so, but our patience has a threshold that if reached, the Iranian government and state may take steps, so think about that day.”

“Our waiting does not come from our weakness, but from our prudence and the interests of the Iranian nation and the region,” Rouhani stressed.