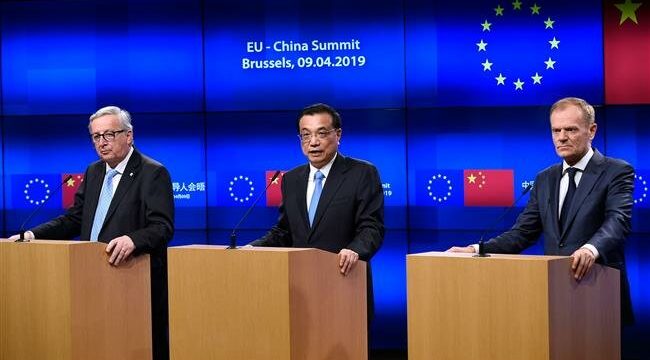 Press TV – China and the European Union have once again reaffirmed their commitment to the “continued, full and effective” implementation of a 2015 multilateral nuclear agreement as a leading factor in the global non-proliferation architecture.

At the end of their 21st leaders’ meeting held in Brussels on Tuesday, China and the EU issued a joint statement, praising the nuclear accord as a key element of the global non-proliferation architecture and a significant diplomatic achievement unanimously endorsed by United Nations Security Council Resolution 2231.

The statement further said the two sides “reaffirm their commitment to its [the deal’s] continued, full and effective implementation, as well as their efforts to preserve economic benefits for Iran.”

The deal – officially called the Joint Comprehensive Plan of Action (JCPOA) — was initially inked in 2015 between Tehran and six world countries, namely the US, Russia, China, France, Britain and Germany.

Last May, however, US President Donald Trump withdrew his country from the JCPOA – which had been negotiated under his predecessor – and re-imposed the anti-Iran sanctions that had been lifted under the landmark deal.

Despite Washington’s withdrawal, Iran has not left the deal yet, but has stressed that the remaining signatories to the agreement need to effectively offset the negative impacts of the US pullout on Iran if they want Tehran to remain in it.

China and the EU further stressed the importance of modernizing the Arak heavy water reactor in central Iran, and the need to continue their common efforts in this regard, the statement said.

In April 2017, Iran and China signed the final version of a contract to redesign and modernize the Arak heavy water reactor.

According to the agreement, the Chinese side is to review the new design of the Arak reactor made by the Iranian experts and confirm its compliance with the international safety standards of the International Atomic Energy Agency (IAEA).

The statement further added that China and the 28-nation bloc welcomed the fact that the IAEA has confirmed in 14 consecutive reports confirming Iran’s adherence to its side of the JCPOA.

Under the JCPOA, the IAEA is tasked with monitoring the technical aspect of the JCPOA’s implementation.