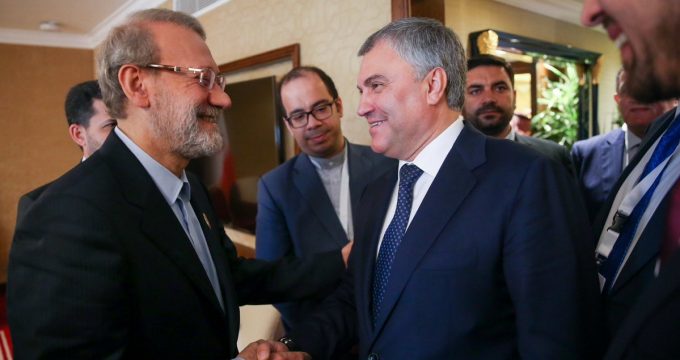 TASS – Russian State Duma (lower house of parliament) Speaker Vyacheslav Volodin has invited an Iranian delegation to Moscow in order to participate in the International Forum on the Development of Parliamentarism.

“On July 1-2, the second International Forum on the Development of Parliamentarism will take place. We would be glad if you come or send a delegation,” Volodin told Speaker of the Parliament of Iran Ali Larijani on the sidelines of the assembly of the Inter-Parliamentary Union (IPU) in Qatar.

Volodin added that the format of Russian-Iranian relations is expanding, inviting Larijani personally to visit Russia. “We would be glad to see you and meet you at any time. When the schedule allows it, I would like to invite you to Moscow. The tougher the times are, the more often we need to communicate. We see the challenges standing in front of the world,” Volodin said.

The official visit of the Russian State Duma’s delegation to Qatar is taking place on April 6-7. Volodin, the head of the delegation, will take part in the sessions of the IPU assembly and give a speech at the plenary session. Several bilateral meetings have also taken place.