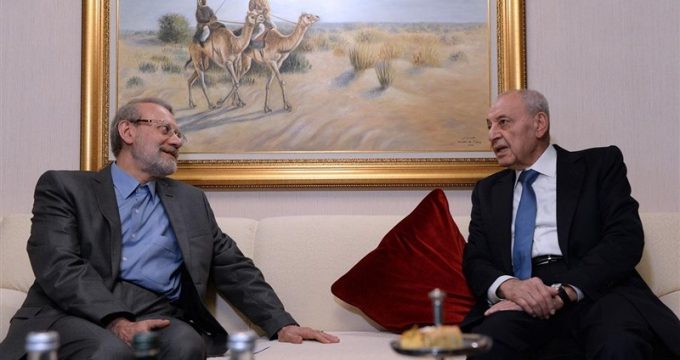 Tasnim – The parliament speakers of Iran and Lebanon stressed the need for concerted efforts by Muslim nations against the US recognition of Jerusalem (al-Quds) as capital of the Israeli regime.

Iranian Parliament Speaker Ali Larijani and his Lebanese counterpart Nabih Berri discussed a range of issues at a meeting on the sidelines of a biannual meeting of the Inter-Parliamentary Union (IPU) in Qatar.

In the gathering, the Iranian speaker condemned US President Donald Trump’s decision to move the American embassy in Israel to Jerusalem (al-Quds), calling for “practical measures” by Arab countries in this regard.

For his part, Berri denounced the US plots against Palestine, saying it is a pity that certain Arab states are working against Qatar instead of joining hands against the US and Israel.

Pointing to the absence of four anti-Qatar Arab countries in the IPU conference, the Lebanese speaker said that only words, not practical action, have been heard from those countries over the issue of Palestine.

Qatar is playing host to the 140th General Assembly of the Inter-Parliamentary Union (IPU) and its related meetings, including the 204th session of the Governing Council and the IPU’s Standing Committees from April 6 to 10.

The theme of this year’s general debate will be “Parliaments as platforms to enhance education for peace, security and the rule of law.”

The event is attended by parliamentary delegations from around 180 countries.