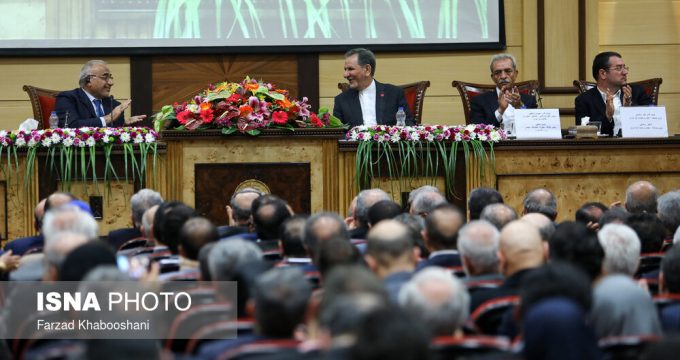 Iran eyes $20bn trade with Iraq in next 2 years

IRNA – Iran says it plans to reach 20 billion dollars in volume of annual trade with Iraq in the next two years.

“Our strategy to develop economic and political cooperation with Iraq is to hit the target of $20 billion trade in 2021 (1400, according to the Persian calendar),” said Iranian First Vice President Eshaq Jahangiri addressing the joint Iran-Iraq business forum that was held at Iran Chamber of Commerce, Industries, Mines and Agriculture (ICCIMA) in Tehran on Sunday afternoon.

“Materializing this target has an important role in quantitative and qualitative development of ties and elevating economic indices between the two countries,” he added.

Current annual trade volume between Iran and Iraq stands at 12 billion dollars, according to Jahangiri.

A large number of Iranian and Iraqi businessmen and women took part in the joint business forum that tries to ease bilateral trade and facilitate further economic relations.

He stressed that Tehran will stand by Baghdad in the reconstruction period, saying his country has always supported Iraq’s sovereignty, independence, territorial integrity, political security and stability.

“Iraq has entered a period of reconstructing itself in a bid to successfully go through the challenges, obstacles as well as pursue a political process based on democracy and political stability,’ Jahangiri mentioned.

The Iranian official noted that his country is ready to engage in mutual and multilateral cooperation in a bid to accelerate Iraq’s reconstruction and economic development.

He said Iranian firms are prepared to set up joint companies with Iraqi economic operators as well as third parties to take up big projects in the Arab country.

The first vice president criticized “illegal and brutal” US sanctions that go against development of bilateral relations between Iran and Iraq.

Es'haq Jahangiri, Iran-Iraq trade, Iran’s Chamber of Commerce Industries Mines and Agriculture (ICCIMA) April 7, 2019
Optimism growing among oil traders on signs of a tightening market
Judiciary to use all legal means in dealing with wrongdoers in flood-hit areas: Raeisi