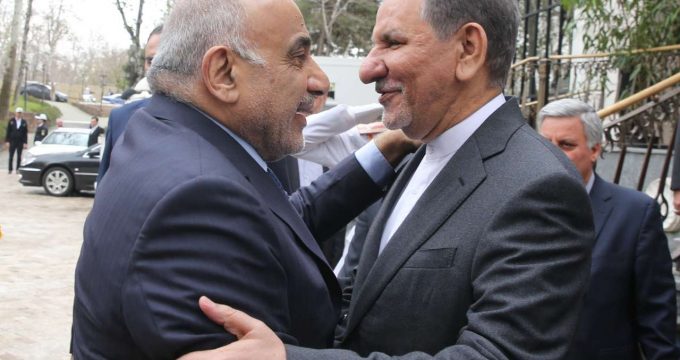 “Good agreements have been made between Tehran and Baghdad during these (reciprocal) trips, whose clear message is that despite the US enmities, Tehran and Baghdad are determined to expand all-out ties,” Jahangiri said in a meeting with Abdul Mahdi in Tehran on Sunday.

He underscored Tehran and Baghdad’s emphasis on the further reinvigoration of economic relations, and said that Iran will not leave Iraq alone during the reconstruction era as it helped the country in the fight against terrorism.

Abdul Mahdi, for his part, stressed that the two countries’ power and weaknesses directly affect both states, and noted, “Baghdad never allows Iraq’s soil to be used for aggression against Iran and we do not want to be a part of the sanctions against the Islamic Republic of Iran.”

Addressing a joint presser with Iranian President Hassan Rouhani on Saturday, Abdul Mahdi reiterated that Baghdad owed its peace and security to Tehran.

“The Islamic Republic of Iran helped us in the fight against terrorism and we managed to achieve many victories that contributed to the current peace and stability in Iraq,” the Iraqi Prime Minister said at the presser.

“Today, leaders from all around the world visit Iraq, and we are witness to a transformation that is to the benefit of both the Iraqi people and the rest of the countries in the region.”

“We believe that it was due to Iran’s support that Iraq succeeded in reaching this point,” he added.

“We are seeking to further expand relations between Iraq and the Islamic Republic of Iran,” Abdul Mahdi stressed.

He went on to add that Iraq also sought to develop ties with Kuwait, Saudi Arabia, Oman, Qatar, the UAE, Egypt and other countries in the Middle East.

“We seek to establish a stable and peaceful region in which the era of wars has come to an end,” he said, adding that the only solution to the Yemeni crisis is a political approach.

The Iraqi prime minister also stressed that his country was resolved to prevent any groups from using its soil to launch threats against Iran.