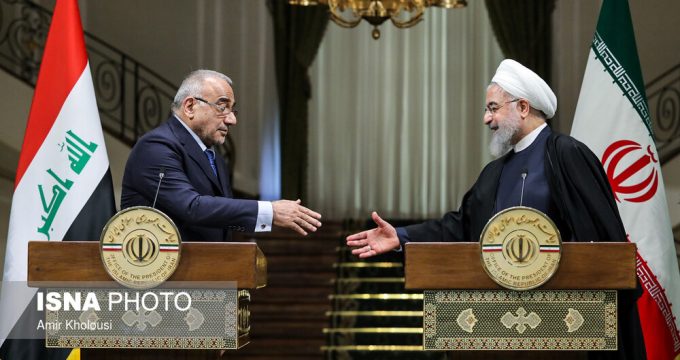 President.ir – Speaking on Saturday in a joint press conference with the Prime Minister of Iraq, the President described relations between the two countries close and historical and said, “Relations between Iran and Iraq have been growing for centuries”.

“Today, conditions are optimal for development of relations between Iran and Iraq, and, God-willing, these conditions will be beneficial for both nations and the region,” said President Hassan Rouhani.

He added, “One of the most important topics that we talked about today was accelerating the implementation of all agreements made during my visit to Iraq”.

He also referred to the agreement between the two countries to issue visas free of charge, saying, “With free visas, we hope that relations between the two nations further grow”.

On the agreement to dredge Arvand Rud, Dr Rouhani said, “This topic was also stressed by both sides today, and I hope that the technical requirements will be met by the end of this year’s Ramadan month”.

He went on to mention the linking of the two countries’ railways, saying, “We hope that this linkage happens in different routes, but for now, the connection of Shalamcheh-Basra is emphasised by both sides”.

Referring to the export of power to Iraq and linkage of Iran’s power and gas network to Iraq, adding, “We are ready for these connections and believe that this will benefit not only the two countries, but also other countries in the region”.

“In monetary, financial and banking relations, the two countries have taken good steps in the recent months,” said the President.

Dr Rouhani also went on to say, “Our plans for the future is achieving a $20-million trade goal between the two countries, which we hope will be achieved in the coming months”.

On establishing joint industrial parks at the border of the two countries, the President said, “Today, we agreed to put establishing a park in the south and another one in the west on the agenda”.

Referring to standardisation for goods such as medicine, the President said, “This was emphasised by us and we hope that both sides’ companies reach an agreement”.

Dr Rouhani referred to security issues and said, “We discussed improving security at the borders of the two countries, combatting terrorism, drugs, and smuggling”.

“The two countries emphasise that the war in Yemen must be ended as soon as possible and the solution to the Yemeni war is only political,” added the President.

During the joint press conference, Prime Minister of Iraq Adil Abdul-Mahdi thanked the Iranian nation and government for their hospitality and said, “I believe that all agreements that have been made between the two countries will be beneficial for both countries, the region and the world”.

He stressed, “We have said before, and we reiterate today, that we are alongside the Iranian government and nation in happiness and sadness”.

He went on to express sympathy for the recent floods in Iran and said, “We need to plan to avoid problems and hardships”.

“The Islamic Republic of Iran has helped us a lot in combatting terrorism,” said the Iraqi Prime Minister, adding, “Today, we have more peace and stability in Iraq and we have made many achievements”.

Abdul-Mahdi added, “We owe our current position and security to Iran’s support”.

The Iraqi Prime Minister also said, “Tehran-Baghdad ties can be a model for our ties with other regional countries to follow”.

“We favour peace, stability and security in the region, including in Yemen, and we believe that the only solution to the Yemeni problem is political”.

He continued, “We are determined to stand against any threats against Iran from our soil”.