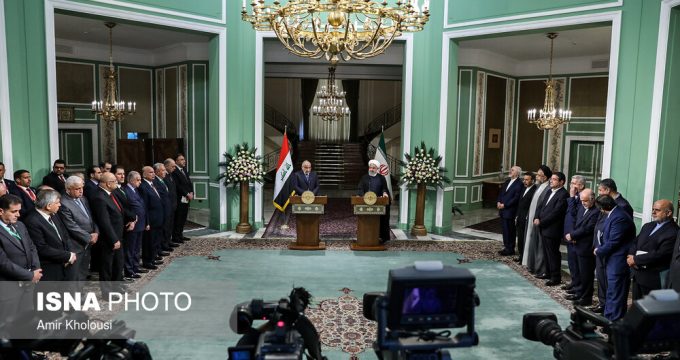 Iranian President Hassan Rouhani called on Saturday for Iran and neighbouring Iraq to expand their gas and electricity trade and work towards fulfilling a plan to connect their railroads.

Speaking on Saturday in a joint press conference with the Prime Minister of Iraq, the President described relations between the two countries close and historical and said, “Relations between Iran and Iraq have been growing for centuries”.

Iranian Foreign Minister Mohammad Javad Zarif said US President Donald Trump and Secretary of State Mike Pompeo would make any “contradictory” claims against Iran as the occasion may demand to either demonize the Islamic Republic or push for “regime change” in the country.

US to designate elite Iranian force as terrorist organization

Iran moved on Saturday to evacuate more towns and villages threatened by floods after continued rain in the southwest of the country, state television reported, as the nationwide toll from the flooding reached 70.

A member of the Expediency Council, Gholamreza Mesbahi Moghadam, said Sat. the date for holding a session on reviewing Iran’s accession to the two FATF-related bills is still uncertain.

Iran to designate US forces as terrorists if Washington blacklists IRGC: senior MP

Chairman of National Security and Foreign Policy Commission of Iranian Parliament Heshmatollah Falahatpisheh said that Iran will strike back at any move for blacklisting Islamic Revolutionary Guards Corps.

France to provide aid for flood-stricken regions of Iran

The Foreign Ministry of France announced that the country will send an emergency humanitarian aid shipment to Iran to mitigate the effects of floods which have hit several provinces of Iran in the past few days.