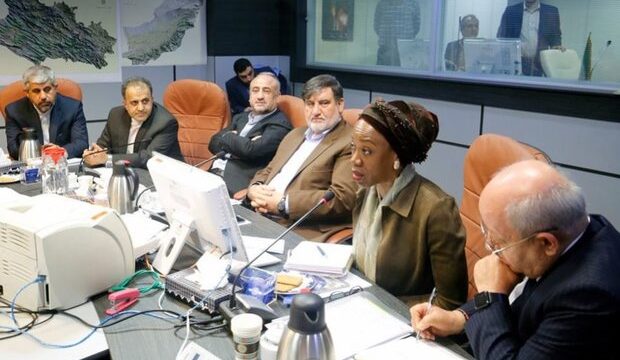 In her Friday tweet, UN Resident Coordinator and UNDP Resident Representative in Iran, Ugochi Daniels, noted that during the meeting, the two sides discussed the concrete humanitarian actions so far taken by the UN and its affiliated bodies regarding the victims of massive flash floods in Iran.

The sides also conferred on the plans to step up the rescue operations and explored the ways to facilitate the delivery of UN-backed aids for the victims of the devastating water torrents.

Unprecedented heavy rains in the past two weeks have caused devastating floods in various parts of Iran, leading to the death of over 70 people and injuring and displacing many others.

The flash floods have hit 400 villages and cities in 15 provinces across Iran.

Meanwhile, rescue teams, Iranian armed forces and volunteers from across the country have been making every effort to salvage the damages as fast as possible.

The European Commissioner for Humanitarian Aid and Crisis Management Christos Stylianides earlier said “following the severe floods in Iran, we are allocating an initial amount of €1.2 million in emergency support to assist the most vulnerable communities.”

The United Nations International Children’s Emergency Fund (UNICEF) also said on Thursday that the “initial supplies from UNICEF are already on their way to Iran” to ensure that immunization and young child nutrition services are quickly re-established in the flood-affected provinces.

A plane carrying humanitarian aids by the German Red Cross also arrived in Tehran on Thursday to contribute to the operations.