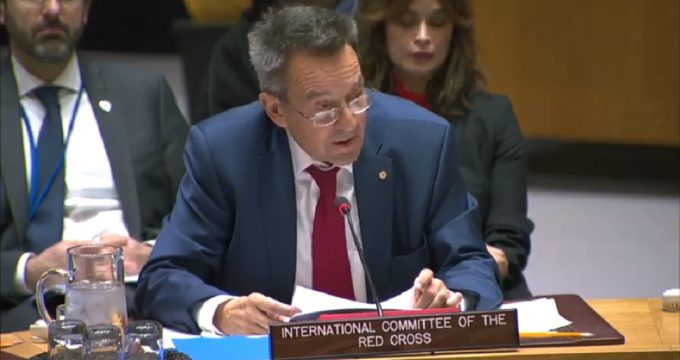 ‘Human dignity is disregarded, the applicability of the law Is questioned, humanitarian aid is politicized and deliberately hijacked for political gain or to control populations. Terrorist attacks, indiscriminate by nature, are destroying the very notion of proportionality, precaution and distinction, which are at the core of behaviour in combat,’ Peter Maurer said addressing the UN Security Council meeting on the promotion and strengthening of the rule of law: international humanitarian law: ‘Safeguarding Humanitarian Space’.

Maurer went on to say that ‘humanitarian organizations are increasingly placed under pressure as both States and non-State armed groups hold civilian populations and humanitarian actors to ransom in order to achieve their
goals.’

He reiterated ‘when the principles of impartiality are breached and humanitarian action is curtailed, families – like
the ones I meet – go hungry, they fall sick, they are left vulnerable to abuse. No wonder they are
asking ‘why?’.’

The US has imposed the most unilateral sanctions against individuals and institutions in the world.

Sanctions have also impeded humanitarian aids issuance in a way that Head of Iran Red Crescent Society Ali Asghar Peyvandi earlier said that the society had SWIFT accounts before sanctions through which they could attract global aids.

He added that the mentioned accounts have been sanctioned which made impossible money transfer from other countries and also International Federation of Red Cross and Red Crescent Societies.

Unprecedented heavy rains caused floods in various parts of Iran over the past two weeks. Scores of people were killed and injured and a large number were displaced across Iran.