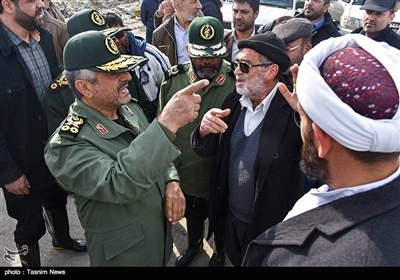 The IRGC Commander Major General Mohammad Ali Jafari arrived in Golestan Province, which have severely been hit by the recent floods, on Saturday morning to inspect the relief operations by the armed forces.

Commenting on the measures taken by the IRGC forces to help the people in the flood-hit area he said, ” The recent explosions by the IRGC are aimed at helping to evacuate and transport water to the sea.”

Leader of the Islamic Revolution Ayatollah Seyyed Ali Khamenei earlier this week called on officials and the people to assist the flood-affected people. Armed forces including the IRGC, Army, Basij, and Iran’s Red Crescent, and all other relief forces have been assisting the people in flood-hit regions since earlier this week.

As many as 42 people have lost their lives in the recent floods across the country this week, according to the head of Iranian Legal Medicine Organization.