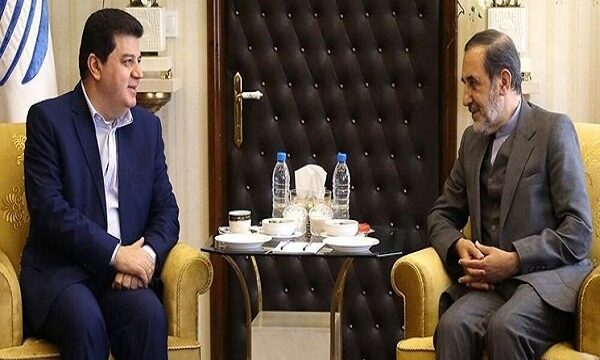 MNA – In a meeting with Syrian ambassador to Tehran, senior aide to Iran’s Leader Ali Akbar Velayati says that Trump’s proclamation of Israeli regime’s sovereignty over the Golan Heights was a move to cover up Israel’s crimes and problems.

Senior Adviser to Iran’s Leader for International Affaris Ali Akbar Velayati met with Syrian ambassador to Iran on Thursday, a meeting which took place at the request of the Syrian diplomat.

At the start of the meeting, the Syrian ambassador conveyed President Bashar Assad’s message of condolence on the loss of lives in recent floods in some Iranian provinces, and briefed on the recent US president’s recognition of Israeli regime’s sovereignty over occupied Syrian Golan Heights as well as the air strikes carried out by Israel on targets in Aleppo the night before.

“These moves are an indication of the aggressiveness of the Americans and a clear violation of the sovereignty and territorial integrity of Syria, the countries of the region and the Resistance Front,” the Syrian diplomat pointed out.

Ali Akbar Velayati, for his part, expressed his gratitude for President Assad’s message of condolence and pointed to the solid and strategic relations between Iran and Syria and recent move by the US and Israel on Golan Heights, saying that the US oppressive policies in Latino America, Europe, African and Asia will further isolate it.

The senior aide to Iran’s Leader further said that the US latest move in recognizing the Israeli regime sovereignty over Golan Heights was a move to cover up Zionists’ crimes and problems.

Meanwhile, Velayati stressed that the move will fail, as it has received wide condemnations as could be seen at the UN Security Council’s meeting on Wednesday.

He went on to add that Trump’s actions in terms of the ‘Deal of the Century’, Embassy move to Quds and his latest Golan Heights move are nothing new and are in continuation of his predecessors’ policies.

“What is certain is that the Resistance Front will continue its path more resolutely than ever until final victory is achieved,” the senior aide to Iran’s Leader further noted.