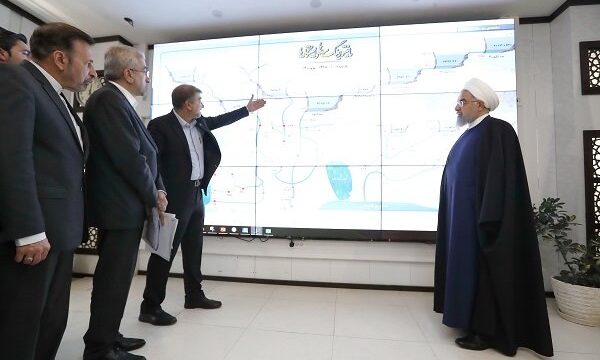 MNA – On a visit to flood-hit areas in the southwestern province of Khuzestan, Iranian President Rouhani visited Khuzestan Water and Power Authority’s monitoring Centre and inspected the condition of the dams in the province.

During a visit to Khuzestan Water and Power Authority’s monitoring Centre on Friday afternoon, Rouhani was briefed by managers and engineers on the level of water and outflow and inflow of the 11 dams in the province.

After listening to the reports, the president stressed that with regard to the rainfall in the coming days, the water level and the condition of dams in the region should be managed well so that little or no damage is inflicted on the area.

Furthermore on the visit to the southwestern province today afternoon, the first phase of the project for equipping, renovating, supplying water and trenching Khuzestan Province agricultural lands was opened in Rouhani’s presence.

Today’s Iranian President’s trip to Khuzestan comes a day after he visited the northern provinces of Golestan and Mazandaran, which have also been hit by earlier this week’s heavy rain and flash floods, on Wednesday and Thursday.