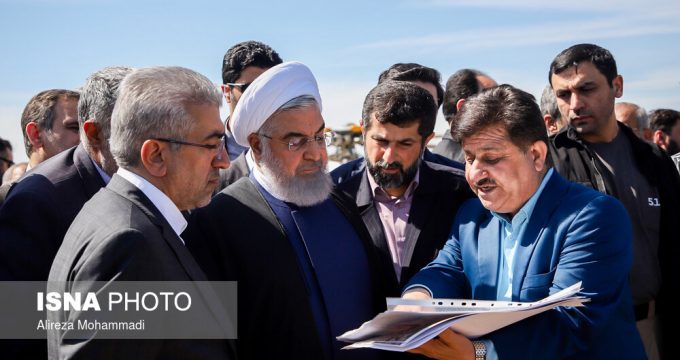 IRNA – President Hassan Rouhani on Friday stressed the importance of timely programs to control any forthcoming heavy rain and floods.

President Rouhani made the remarks while touring various development projects in the province of Khuzestan in southwest of the country.
President Hassan Rouhani accompanied by a number of cabinet ministers arrived in Khuzestan province on Friday morning to closely examine the flood-stricken region in the province.
Ministers of energy, Agriculture Jihad, Justice, Road and Urban development are accompanying President Rouhani during the visit
In fact, he said, recent floods should be regarded as a blessing for the country as they have immense effect on revitalization of some of the provincial wetlands like Hoorolazim which were exposed to ultimate death, President Rouhani said.
Flow of waters in the province’s rivers like Maroun, Karkhe and others are sign of God’s blessing which should be heeded so officials have to be vigilant enough to avoid any damages which might be created by massing floods in rainy days, he said.
He also expressed the hope that developing projects in the province to go on stream within his tenure.
Implementation of 550,000 hectare land project in the province will bring self-sufficiency, employment and increase people wealth, he said.
. Good management in the province prevented occurrence of any problems resulting to devastating flood in the province.
Some 35 villages are in danger of inundated waters to be outpoured from Karkhe and Dez damns.
Devastating flood hit various provinces in Iran in recent days leaving high number of casualties.