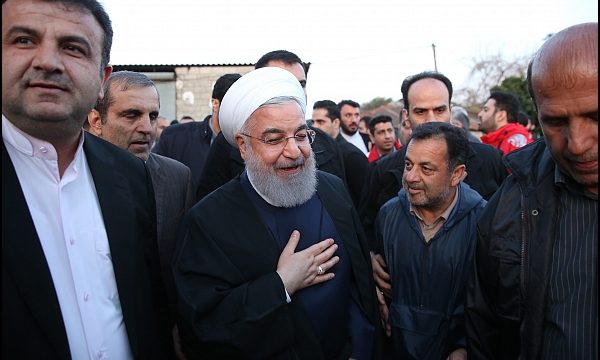 Gov. to stand by people of flood-hit areas until damages repaired

MNA – On a visit to flood-hit areas in the northern province of Golestan Wed., President Rouhani thanked IRGC, Army, Basij, Red Crescent, and all relief forces who helped the people in flood-hit areas, promising that his government will stand by the people until damages repaired.

Speaking on Wednesday at the session of Coordination Council of Disaster Management Taskforce of Golestan Province, Hassan Rouhani called on the Housing Foundation, Plan and Budget Organisation, and members of the parliament to accelerate repairing the damages, according to the official website of Iranian Presidency ‘President.ir’.

Rouhani said “we will stand by the people until the floodwater is drained and damages are repaired, and the government supports the Housing Foundation for reconstruction of houses.”

“Unity among all ethnic and religious groups in this province is exceptional,” he added.

He continued “IRGC, Army, Basij, Red Crescent, and all relief forces have been at the service of the flood-hit people and we appreciate their efforts.”

“In the long term, we require a wide waterway for this area,” he said, adding “appointing an acting governor-general for this province was a must.”

Rouhani went on to state “it is an honour for the government and the armed forces to serve the people.”

Saying that “most of the houses in Aqqala and Gamishan are under the cover of insurance,” he continued “developing insurance is the ultimate solution to addressing disasters.”

“Floods bring people hardships, but we need to turn them into an opportunity to resolve the basic problems that the province has,” said Rouhani.

He added “Ministry of Communications and Information Technology should continue and develop the alert system.”

President Rouhani continued “I thank all popular and armed forces, and organs and institutions for their services to people in these recent days.”

“Let’s turn sanctions and threats into opportunities together,” he added, saying, “The government has taken good decisions to compensate and repair the damages caused by the floods.”

He also went on to say “after the final estimate of damages, the government will provide the necessary budget.”