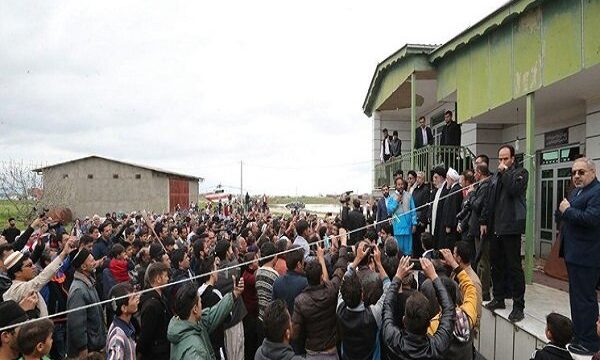 MNA – Iranian President Hassan Rouhani visited a village in Aqqala country, northern province of Golestan on Wed. and held talks with people of the city.

As soon as he arrived in Golestan province, he set off for the village, which has suffered destructions as the result of the recent floods in the area.

The President was briefed by the Minister of Interior Abdolreza Rahmani Fazli and other local officials on the relief process and measures taken for repairing the damages, issuing the necessary instruction for addressing the problem.

President Rouhani pointed out that solving problems facing flood-hit people is the main duty of the government.

Government will spare no efforts to compensate the damages incurred to flood-stricken people in the shortest time possible, he added.

Many residential units were destructed in floods erupted at villages of Golestan province, he said, adding, “with the studies made in this regard, it is hoped that all these destructed houses would be reconstructed before the termination of the third quarter of the current year (Sept. 21).”

Housing Foundation of the Islamic Revolution is responsible for compensating the damages incurred to destructed houses, he reiterated.

President Rouhani once again reiterated that the government officials will make their utmost efforts to offering high-quality relief and rescue services to the flood-hit people.