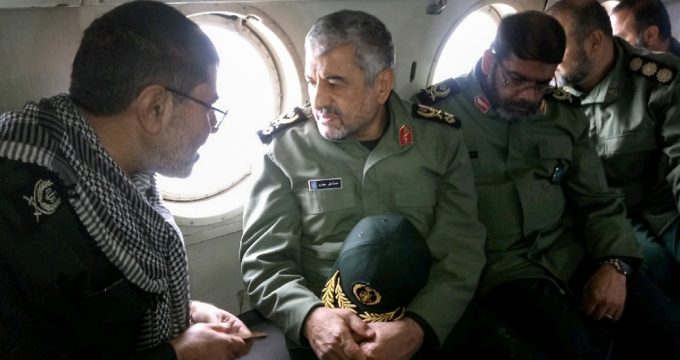 Mizan – Commander of the Islamic Revolution Guards Corps (IRGC) Major General Mohammad Ali Jafari paid a visit to flood-stricken areas in the northern province of Golestan. A number of other IRGC commanders accompanied him in the visit on Tuesday. Speaking to reporters during the visit, Major General Jafari referred to participation of IRGC units in rescue and relief efforts and said the main priority is helping to drain the flood waters. He said providing relief and accommodation to those affected is underway but drainage is taking some time as dredging riverbeds has not been prior to the flooding. Heavy rainfall hit the two northern Iranian provinces of Mazandaran and Golestan on March 19-20. Rivers and other streams — abundant in northern Iran — overflew their banks as a result, in turn flooding cities, towns, villages, and farming communities. Two dams also overflew in Golestan. Over 56,000 people have been affected in at least 70 villages in Golestan and more than 200 in Mazandaran. At least five people have been killed.