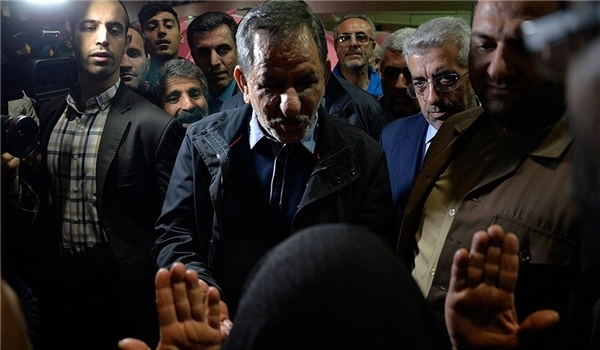 During his visit to the flood-stricken areas on Saturday, Jahangiri said that government will make up for the losses and damages inflicted upon flood-stricken people and areas.

During his visit, he was informed about the conditions of the flood-stricken people and health services.

He went on to say that Iranian government will stand by people in all difficulties.

Heavy rains have pummeled Iran’s Northern provinces of Mazandaran, Golsetan, North Khorasan and Semnan in the past couple of days, swelling floods that have forced evacuations and caused damages to infrastructures.

At least 70 villages in Golestan and more than 200 in Mazandaran are inundated. Aqqala is the worst hit where landslides have killed two people, director general of Golestan province’s crisis management department Mojtaba Jamali said.

High water has forced evacuations of several small farm communities as all farmland has been swamped, according to local reports.

Footage from provinces of Golestan and Mazandaran showed massive flows of water running over roads and streets, with cars being washed away, people struggling to walk, and traffic being disrupted.

The flooding has claimed the lives of five people and destroyed hundreds of home over the past few days.