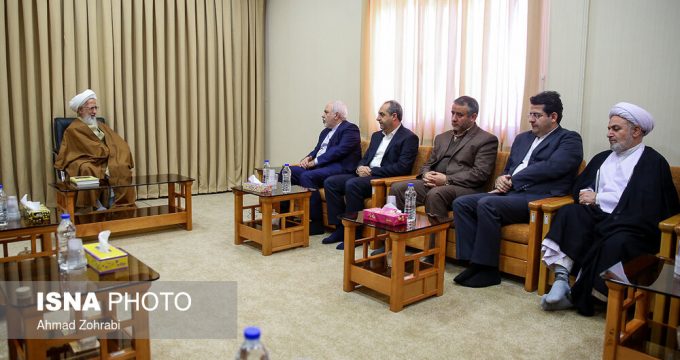 Asharq Al-Awsat – The Iranian government is attempting to convince conservatives to approve the bill to join the Financial Action Task Force (FATF) agreement. For that, Foreign Minister Mohammed Javad Zarif went to Qom, the stronghold of conservatives, and briefed officials on the government’s plan, three months before the group’s deadline for Iran.

FATF is an inter-governmental body that sets standards and promotes effective implementation of legal, regulatory and operational measures for combating money laundering, terrorist financing and other related threats to the integrity of the international financial system.

Zarif downplayed the importance of media leaks that preceded his visit, which claimed that the government resorted to religious references on FATF following the growing differences between the government and parliament on the one hand, and the councils of Guidance and Expediency Discernment on the other.

“Two committees in the Expediency Council are studying the FATF plan and the decision will be taken in accordance with the best interests of the country,” he said.

The government has made no significant progress since the implementation of the nuclear agreement on commitments and compliance with the Paris-based FATF Group.

Over a month ago, lawmakers asked the Expediency Council to interfere, but failed to reach a consensus on the government’s draft.

Iranian parties fear the impact of Iran’s accession to international conventions on the activities of the Iranian Revolutionary Guard Corps (IRGC) and its foreign arm, Al-Quds Force, and other Tehran-backed armed groups.

Iranian television quoted Religious Authority Safi Golpaygani as calling on the government to dispel Iranian fears over the economy and resolve internal differences.

Golpaygani warned that differences between officials would allow enemies to infiltrate and achieve their goal. He described the current economic situation as “sad”, saying problems can be solved by good and useful policies.

He reiterated the importance of maintaining constructive and good relations with neighbors and the world, urging Zarif to continue his regional visits and improve relations with countries, such as Egypt, Morocco and Jordan.

Meanwhile, Religious Authority Wahid Khorasani told Zarif that he calls on President Hassan Rouhani to think of the people and their living conditions and “speak softly with the world,” according to Shafaqna news agency.

The Foreign Ministry announced the appointment of a representative in Qom, which Zarif explained was due to the important role the city plays in politics. He added that crucial matters in the world are no longer in the hands of the West, but the “situation has changed and today the world is going through a post-Western phase.”

He warned that some traders claim the increased currency exchange rate is the reason for the rise in prices, but they refuse to lower prices, noting that goods are sold at triple their actual price.

He attributed the recession and increased unemployment rate to the growing phenomenon of brokering and lack of capital in the country, calling on the media to raise awareness on the issue.

Shirazi also criticized some figures for causing frustration among people for political purposes. He called on a Rouhani’s government to be active, plan and strengthen its ranks.

Addressing the spike in corruption, he said that the weakness of the regulatory and security bodies caused embezzlement.