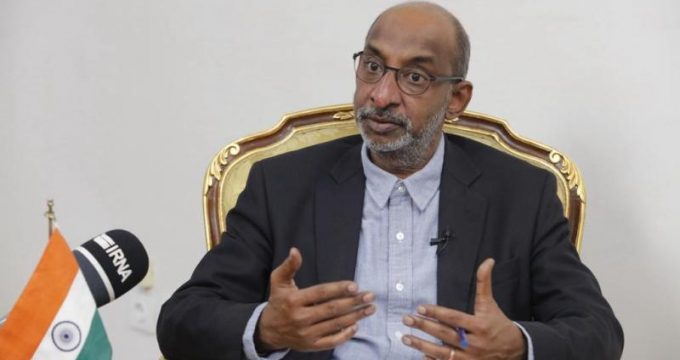 IRNA | Vahide Didnari & Ali Izadi: The Indian Ambassador to Iran Gaddam Dharmendra hailed all commonalities between Iran and India especially the cultural ones and said Nowruz is regarded as a great platform to bring two nations closer.

Speaking in an exclusive interview with the Islamic Republic News Agency (IRNA), Dharmendra said “Nowruz would be one of those elements which links our two societies in terms of celebrating March Equinox.”

He added: “Actually we have a very large Farsi community who migrated to India maybe more a thousand years ago, so they celebrate Nowruz. We also have a small but significant diaspora mostly students and businessmen who live in India and they also celebrate Nowruz.”

Nowruz (meaning new day in Persian) marks the first day of spring and Persian New Year that is celebrated across the world by various countries, particularly in Afghanistan, Albania, Azerbaijan, the Former Yugoslav Republic of Macedonia, India, Iran, Kazakhstan, Kyrgyzstan, Tajikistan, Turkey and Turkmenistan. It was registered as an Intangible Cultural Heritage of Humanity in 2009 by the UN.

Referring to Nowruz as marking the end of winter and start of spring, he said “It is an Indian festival but it is not rooted in any religion. Iit is more a celebration to welcome spring where we celebrate by sprinkling colors on everybody and water and we wish everyone good health and also good crop from agriculture point of view.”

He also underlined the holiness of spring for Indian people, noting “It is important for the farmers and these are all signs of prosperity, good beginnings for the year ahead.”

Elaborating on the major differences between Iran and India in marking Nowruz celebrations, Indian envoy said “well, basically the Parsis have especial dishes prepared on this day, mostly made of meat and desserts and they invite friends and of course the fruits coming from the fields, new vegetables.”

He noted “We [Indians] do not specifically have Nowruz festival but India is a center for many cultures, religions and practices and people celebrate Nowruz in various forms.

He reiterated that the description of Nowruz is different in both countries but the practices are the same.

“We celebrate with green vegetables, fruits, meeting friends,” he emphasized.

For much of the interview, Dharmendra referred to the difference between younger and older generations in celebrating Nowruz, saying “the younger generations may celebrate differently while we, the older generations, are more conservative and they are modern so they will have a lot of pictures posted on Face Book and selfies but it is the same.’

In response to IRNA correspondent’s question regarding cultural commonalities between Iran and India, he said “I will take it beyond Nowruz and I will like to say that Iran and India have an age-old civilization relationships.”

Stressing his ability to understand Persian language, he said “I can tell you that words in Farsi are quite similar to what we use in India.”

“The relationships are anchored in civilization and engagement and it continues to this day,” he reiterated.

‘When you travel to India, you will find signs of Iranian influence like when we travel here [to Iran] and we look at your architecture and we find that there is a relationship between two nations.’

“I think one way to do it would be to have journalist go to India meet some of the younger people, take photos and film and show them to their people,” Dharmendra suggested.

Elsewhere in his remarks, he referred to plans that the Indian government has to promote relations: ‘As you know in the last for years we had two high-level exchange of visits which shows the higher frequency of visits between two countries in commercial, business and also tourism.”

“We had president Rouhani in India last year and Prime Minister Modi here in Iran,” he said.

The visit of the Iran’s President Hassan Rouhani to India took place at the official invitation of the country’s Prime Minister Narendra Modi who visited Iran last year.

Earlier, Modi in a message hailed negotiations with his Iranian counterpart.

‘Had fruitful talks with President Hassan Rouhani. We had detailed discussions on ways to further deepen cooperation between India and Iran,’ Modi wrote on his Twitter message released.

Referring to the achievements of the trip, he said in a separate message that ‘Important agreements were signed between India and Iran, which will benefit our nations. President Hassan Rouhani and I released a stamp marking the warm history and promising future of India-Iran ties.’

Dharmendra went on to say “on weekly basis, we have a business, cultural, tourism delegation in Mashad for religious purposes and lots of Indian students are studying in Qom and also Shia Muslims from India come to Iran for Mashad, Qom and then Iraq, Najaf and Karbala.”