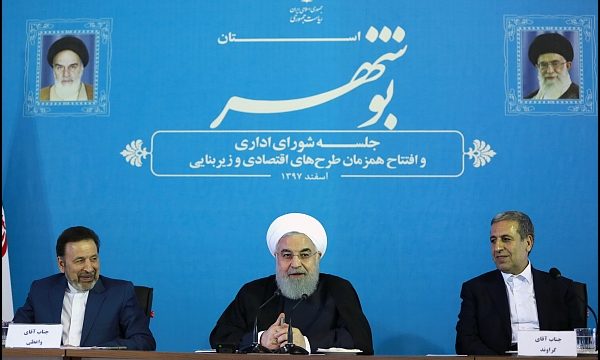 Rouhani calls on judiciary to sue US for crime against humanity

MNA – Iranian President Hassan Rouhani described US sanctions as ‘crime against humanity’ and called on the Judiciary Branch of the country to take legal action against US officials for imposing medicine and food sanctions against the Iranian nation.

He made the remarks at the session of Administrative Council of Bushehr Province on Sunday evening. Rouhani paid a one-day visit to the southern province to inaugurate four phases of South Pars gas field.

Iranian president went on to say that “we should resist to make the United States understand that it is going the wrong direction,” stressing, “the judiciary should sue US authorities and the architects of the sanctions regime for crimes against humanity.”

Referring to the unilateral withdrawal of the United States from the JCPOA, he said, “of course, except for a couple of countries, the entire world denounced this move by the US, acknowledging our cooperation with the Security Council and the United Nations.”

“Americans keep saying that they have been tricked into the nuclear deal, but this is wrong and both sides enjoyed the benefits of the deal, and nobody was tricked,” the official website of Iran’s Presidency quoted him as saying.

“The path we have taken is right and we will continue that. From the first day of this government, I announced that we were seeking to cooperate with the whole world, and we were going to respect anyone who treated us with respect,” said Rouhani.