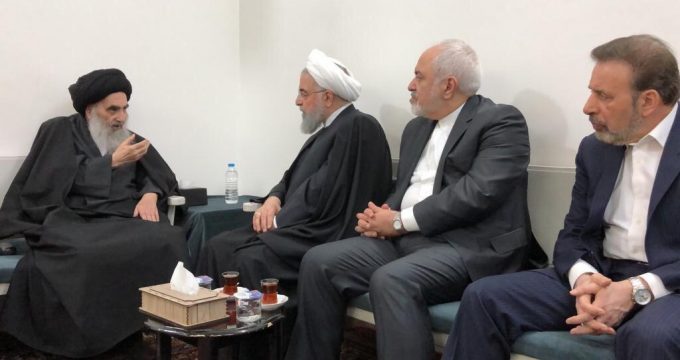 The head of the Atomic Energy Organization of Iran (AEOI), Ali-Akbar Salehi said Sunday that new nuclear achievements will be inaugurated during next Iranian year of 1398, which have been made by the domestic experts.

Iranian President Hassan Rouhani arrived in Baghdad this morning to extend congratulations to the Iraqi people and government over successful holding of elections, and to declare Iran’s readiness for continued cooperation and support for the democratic process and reconstruction of the country.

President after meeting with his Iraqi counterpart: In Iraq, we feel at home

Stating that, “In Iraq, we feel at home,” President said, “Relations between the two Iranian and Iraqi nations go back to thousands of years ago, and we are willing to further develop our religious, cultural, historical and regional relations”.

President.ir – After the signing of five memoranda of understanding between Tehran and Baghdad, President announced that the two countries had agreed to make issuing visas for Iranian and Iraqi pilgrims and tourists free.

MNA – Iranian President Hassan Rouhani said that enemies were after sowing discord among different ethnic and religious groups of the region by the formation of ISIL.

MNA – Hojjatoleslam Seyyed Ebrahim Raeisi has been appointed as the deputy chairman of the Assembly of Experts, which elects and oversees the performance of the Leader of Islamic Revolution.

Iranian Foreign Ministry Spokesman Bahram Ghasemi said “we have been informed about UK government’s recent move to grant “diplomatic protection” to Nazanin Zaghari, and also received a note from the official channels in this regard.”

Another impact of Saddam’s war against Iran removed’: Zarif

“Today, Iran and Iraq released a historical joint statement about their commitment to 1975 agreement and urgent dredging of rivers at the joint border, this will remove one of the other impacts of the war imposed by Saddam Hussein against Iran,” Iranian Foreign Minister Mohammad Javad Zarif twitted on Tuesday.

Rouhani: No power can separate unified Ummah of Iran, Iraq

President Hassan Rouhani described bonds between the Iranian and Iraqi nations as strong, saying that they are united in terms of culture and beliefs and no power can separate the unified Ummah.

The Leader of the Islamic Revolution Ayatollah Khamenei has noted that many problems in Iran, while being an Islamic country, are a result of ‘lack of honesty’.

Iraqi tribes thanked Iran’s support for their country during the fight against Daesh (ISIS) terrorists.

Iran to give crushing response to measures against its oil export: Hatami

MNA – Iranian Defense Minister Brigadier General Amir Hatami warned that if Israeli regime adopts any measure against Iranian oil shipments, it will be faced with a crushing response.

Secretary of the Iranian Supreme National Security Council, Rear Admiral Ali Shamkhani, warned that any attempt to destabilize the country’s borders by any groups or countries will be responded with “severely aggressive” and “preemptive” measures.

Senior Shiite cleric Grand Ayatollah Seyed Ali Sistani in a meeting with Iranian President Hassan Rouhani lauded the role played by the “friendly” states in victory against the ISIL terrorist group in Iraq.

Secretary of the Iranian Supreme National Security Council, Rear Admiral Ali Shamkhani, has warned about the pursuit of ‘suspicious nuclear projects’ by certain countries in the region.

President Hassan Rouhani described his three-day visit to Iraq as a turning point in the bilateral relations between the two countries, saying that the talks and decisions made during the trip would benefit both neighboring nations.

AP — Iran’s semi-official ISNA news agency says the country’s Revolutionary Guard is holding a drill near the strategic Strait of Hormuz to test dozens of Iranian-made drones, including armed drones.

The Iranian Foreign Ministry rebuked the United States’ anti-Iran policies, saying that the US statesmen are trying to fuel tensions among the West Asian countries by unfounded claims and accusations.

Leader of the Islamic Revolution Ayatollah Seyyed Ali Khamenei warns that the US and the Israeli regime have been doing all in their power to advance their hostile campaign against the Iranian nation, calling for “maximum mobilization” in the face of enemy threats.

Tehran dismisses the Iran section of the US administration’s annual “human rights” report as untrue and politically motivated, saying Washington has turned into the “biggest violator” of the Iranian people’s human rights by slapping the nation with unlawful economic sanctions.

It took a country-wide power outage in Venezuela, whispers of a cyberattack, and smug tweets from US officials to make me suddenly recall the cloak-and-dagger story of a close Iranian-American friend nine years ago.

Iranian foreign minister in a message called for ending supporting demonization of Muslims by West.

Iranian Foreign Minister Mohammad Javad Zarif has censured the “terrorist attack and heinous crime” against Muslims in New Zealand, calling for an emergency session of the Organization of Islamic Cooperation (OIC).

Iran and Pakistan have stressed the importance of promoting peace in the region and solving tensions through nonviolent approaches.

IRNA – Iranian foreign minister in a message referred to Iranians’ awareness of the consequences of bigotry and hatred, saying they are not surprised by terrorist attacks.

Iran’s Zarif: Afghans have final say in all affairs

The spokesman for the Atomic Energy Organization of Iran (AEOI) says the Islamic Republic will unveil 112 new nuclear achievements in April.

IRNA – Iranian foreign Minister in a message referred to the chemical attack conducted by former Iraqi regime in Halabja & Sardasht, saying Iranians together with Kurdish brothers will never forget it.

Rouhani: Nobody can disrupt Iran-Iraq ties

IRNA – President Hassan Rouhani said that bilateral relations of the two Muslim, brother and neighboring countries are so strong that nobody is able to disrupt them.

Speaking at the Economic-Trade Forum of Iran and Iraq late on Monday, President Rouhani voiced Iran’s determination to increase trade relations with Iraq to $20 billion from the current $12 billion.

Following talks between Iran’s minister of industry, mines and trade and his Iraqi counterparts simultaneously with President Rouhani’s visit to Iraq, 22 industrial and trade agreements were signed by the two countries.

Iran and Iraq have released a final statement in which they have agreed on no-fee visas, construction of border railway connecting the two countries, establishing joint industrial parks, oil and gas cooperation as well as dredging a border river.

Iranian Minister of Petroleum Bijan Zanganeh said the country would be recovering natural gas and crude oil from 27 phases of the massive South Pars gas field by late March 2020.

Senate votes to end US aid in Saudi fight in Yemen

The Senate approved a measure on Wednesday that would end U.S. military assistance for the Saudi-led war in Yemen, reproving the Trump administration for the second time over its support of the kingdom.

At least two rockets launched from the besieged Gaza Strip have landed in the Israeli capital Tel Aviv, bypassing the Iron Dome missile system to mark yet another embarrassing defeat for one of the world’s most expensive military forces.

Air strikes by a Saudi-led coalition killed at least 22 civilians, including women and children, this week in a village in northern Yemen, the United Nations said.

Yemen’s army says the country’s air defense has managed to shoot down 19 Saudi Apache helicopters since the outbreak of the war in 2015.

Head of Uzbekistan Center of Islamic Civilizations said that there are great capacities for sisterhood agreement between Isfahan and cities of Uzbekistan, including Samarkand.

An international meeting on humanitarian demining was held in Tehran this morning with participation of representatives of Asian countries, the Commonwealth and intl. demining organizations.

Several years of drought has turned Nehbandan area in Iran’s South Khorasan Province on the eastern border with Afghanistan into dry lands with harsh living conditions affecting the already disadvantaged rural population, mainly dependent on their livestock for their food and income.

Financial Tribune – Iran Airports Company registered 394,932 takeoffs and landings during the 11 months to Feb. 19, which shows a 14% decrease compared with the similar period of last year.

Islamic Revolutionary Guards Corps Navy have seized more than one million liters of diesel in coasts of Bandar Abbas, southern Iran, before being smuggled.