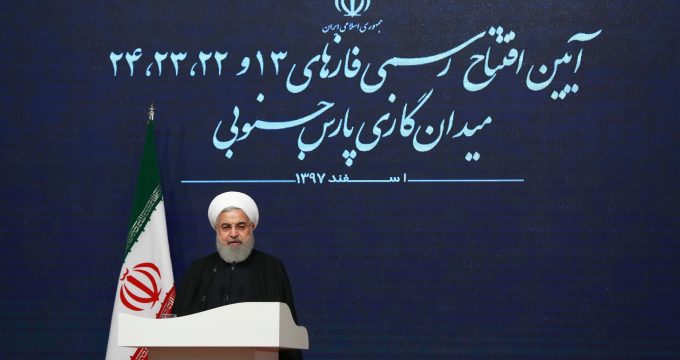 President.ir – President described the goal of the United States by sanctions against Iran as making people concerned about the future and stressed that these sanctions are crimes against humanity and they should know that the people of Iran are in a single line and will not yield to them.

Speaking on Sunday at the opening ceremony of four new phases of South Pars Gas Field, President Hassan Rouhani said, “The United States thought that sanctions will stop our progress and development, but the history-making, devoted people of Iran disappointed them”.

He added, “We reached 25 active phases from 10 in South Pars, and with these four phases, 100 cubic metres were added to the country’s gas production”.

Stating that opening these phases is very good news for the people of Iran, he said, “This is shocking news for the enemies of this land, especially the United States that thought they could stop Iran’s progress through imposing inhumane, illegal sanctions”.

“They thought that they could pressurise the Iranian people to make them desperate, but the great Iranian nation showed their resistance against the enemies’ greed,” he said.

The President also went on to say, “Opening South Pars phases indicates that the Iranian nation have continued, and will continue, their path to development”.

He added, “Opening several important infrastructural and economic projects in the recent weeks, and creating strong bonds with Iraq are very important”.

“Petrol production becoming twofold since the beginning of this government indicates the activity and devotion of the people and oil industry,” said Rouhani.

Referring to the cultural, historical, geographical, economic, and technical and energy power of the country, he said, “Today, we are at the first level of natural resource”.

He continued, “Military power gains significance alongside cultural and historical power, as well as being effective in the region and the world”.

Dr Rouhani also said, “When our oil and gas production increases, it means that our national power has increased”.

Referring to the importance of self-sufficiency of the country, he said, “Previously, we needed to import diesel, petrol and gas, but we have been able to become self-sufficient in these fields in the recent years”.

When the enemies wanted to pressurise the Iranian nation, they used to impose sanctions on petrol production, but today, there is no such thing, said the President, adding, “The enemies of the Iranian nation know this well that we don’t need to import petrol and diesel”.

He also described the economic pressures on the Iranians unfair and said, “Today, we are experiencing problems in environmental issues because of sanctions, therefore, the US’ sanctions are crimes against humanity”.

“Sanctions are more of a psychological war than economic war, and they are putting pressure on the banking system of the world when we want to import goods that we need,” said the President.

Dr Rouhani also said, “Today, the enemies are pursuing the path of sanctions to make people disappointed about the future”.

He continued, “I tell the Americans that they will never achieve their goals, and it is not possible to force the Iranian nation into surrender by putting pressures on them”.

The President also went on to describe his visit to Iraq “a turning point in the relations between the two governments and nations,” adding, “This visit proved well that we can have the best of close relations with our neighbours”.

“The enemies of Iran and Iraq tried for 30 years for us not to reach an agreement for dredging Arvan Rud, but we achieved an official agreement in this visit,” said Dr Rouhani.

Stating that developing close relations with neighbours is beneficial for the peoples of the region and detrimental to the US and Zionist Regime, he said, “The American didn’t want the government to open any projects this year, but finalising all projects based on our schedules means that the conspiracies of the enemies have been foiled”.