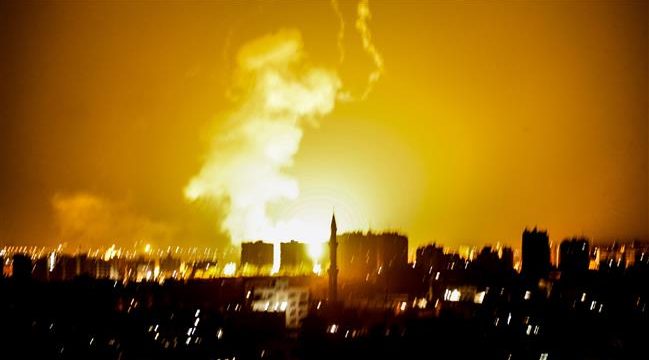 Press TV – At least two rockets launched from the besieged Gaza Strip have landed in the Israeli capital Tel Aviv, bypassing the Iron Dome missile system to mark yet another embarrassing defeat for one of the world’s most expensive military forces.

Several people told local media that they could hear two loud blasts in the Gush Dan (the greater Tel Aviv area), while some also claimed to have seen Iron Dome missiles being launched.

Authorities in Tel Aviv and Rishon Lezion municipalities said they would open public shelters as a cautionary measure.

The Iron Dome missile system was activated but apparently failed to intercept any of the missiles.

The Israeli military confirmed the news but tried to pass off the interception failure as a result of the missile system’s self-destruction mechanism which kicked in once it realized the missiles were going to land in open areas.

Initial reports suggested that the rockets caused no damages or injuries. However, several people had to be treated for shock as this was the first time since Israeli’s last war with Gaza in 2014 that missile sirens were being activated in Tel Aviv.

“We did not have advance knowledge of this fire today, and in fact it surprised us,” Manelis said.

Shortly after the attack, the Israeli military said it was “attacking terror targets in Gaza” but did not provide any details. Palestinian sources reported Israeli attacks near the Khan Yunis port, in southern Gaza.

Eyewitnesses in Gaza said Israeli warplanes were carrying out airstrikes across the enclave.

Israeli Prime Minister Benjamin Netanyahu, who also acts as the regime’s minister for military affairs, called an emergency meeting at army headquarters after the rocket attack.

According to reports, Israelis had asked an Egyptian security delegation in Gaza to leave the area. Media outlets in Gaza reported that the Hamas resistance movement had evacuated military posts in anticipation of Israeli attacks.

The delegation has been mediating indirect talks between Hamas and Israel since late February reportedly in hopes of striking a truce deal that could lead to a long-term agreement lasting between five to 10 years.

A Palestinian source in Gaza told Haaretz that the rockets were fired from the northern part of the enclave. No Palestinian groups claimed responsibility for the attack. Palestinian resistance movements Hamas and Islamic Jihad denied any role in the attack.

The missile attack further hurts Iron Dome’s reputation as a missile shield system that was supposed to once and for all end concerns about rocket attacks from Gaza.

The multi-billion dollar system experienced a humiliating defeat during the latest military flare-up between Gaza and Tel Aviv in November, when Hamas fired more than 460 rockets at the occupied lands in less than 24 hours in response to Israeli aggression.

The clashes ended after an Egypt-brokered ceasefire took effect in Gaza.

The truce was criticized by some Israeli officials and led Avigdor Lieberman to step down as the minister of military affairs. The resignation, which could bring about early elections in the occupied lands, was hailed by Hamas as “an admission of defeat” and a “political victory” for the Palestinian resistance.

Back then, Hamas leader in Gaza Yahya Sinwar warned Israel not to test the resistance group again or it will target Tel Aviv.

Sinwar noted that he had spoken to Muhammad Deif, the leader of Hamas’s military wing the Izz ad-Din al-Qassam Brigades about the possible response to next aggression by Israel.

“Deif asked me to say that Tel Aviv and Gush Dan are next. The first barrage to hit Tel Aviv will surprise Israel,” he said.