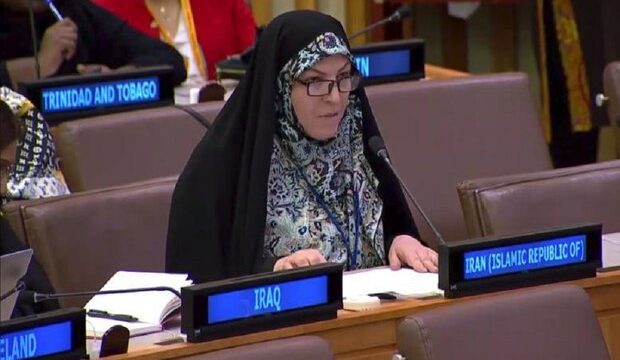 Iran calls on France not to abuse position in UNSC

MNA – Iran has rebuked France’s irresponsible use of its position in the United Nations Security Council to interfere in other countries’ affairs, calling on Paris to instead deal with the widespread discontent within its own country.

Iran’s representative at the 63rd session of Commission on the Status of Women (CSW), Farideh Olad Ghobad, made the statement in the meeting, which was held in New York on Thursday.

Olad Ghobad, who is the head of women faction of the Iranian Parliament, said the Iranian nation, during the past years, has provided the grounds for embracing freedom based on independence, democracy, rule of law and human rights.

She added that after the Islamic Revolution, Iranian women have played effective roles in political, economic, scientific, and social realms and that the Iranian Parliament has ratified various laws to support women’s rights.

Reacting to the remarks made by the French envoy in the inaugural meeting of the commission, the Iranian official said that the French envoy made interfering remarks while abusing the country’s status in the United Nations Security Council.

“I recommend her to deal with the widespread discontent within her own country instead of meddling in other countries’ affairs,” she said.

The official also referred to the unilateral sanctions against the Iranian nation, which have led to the violation of women’s rights in different aspects including health, education and food security.

“The US imposed economic war on the people of my country is contravening October 3 regulation of International Court of Justice,” she said.

Iran and Iranians have never surrendered in the face of incidents, as they proved with their resistance that they will overcome all difficulties, she added.

She further stressed that the Islamic Republic of Iran has always abided by its commitments to guarantee a future worthy of Iranian women and girls and family as the main foundation of the society.